Rockin' Sock Club 2009 kit in da house! As usual, don't scroll past the second pic of my project below: 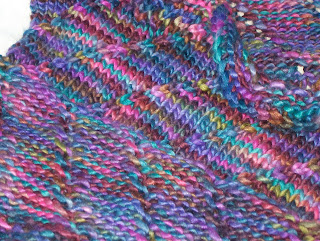 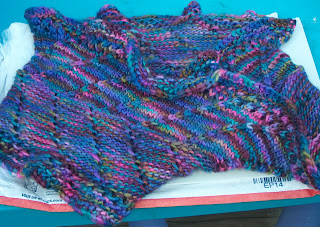 I love how Moody Blues knit up, even in its unblocked state. I have 129 g of the LSS skein leftover. Plenty for a second moebius (moebii to spare?) or a pair of Toasts/Toastys. I haven't decided yet. 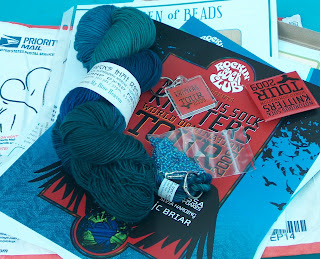 A nice way to end an interesting month. 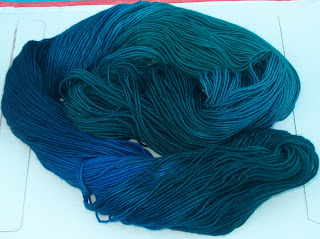 I love the colorway (so me!) and am definitely in my Blue Heaven. Queen of Beads, however, I am not. As for my ballband bluesy singer, I got Lucinda Williams. Off to hear a sampling of her music online.
Posted by Unknown at 4:57 PM 7 comments:

I didn't think much about Cat's nifty moebius concept since I bought her book & the skein of LSS at Sock Camp last April 'til tapmouse suggested I join in Tina's KAL. After the sucky start of my new year, I figured I too needed a little peace and decided to join in. The only thing I won't be doing though is dragging this WIP out for 4 years. Maybe I'll do one a year. And instead of for 4 years, hopefully 8 like Carole suggested in the comments. 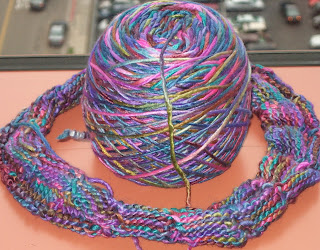 While I started working the main pattern yesterday during the inaugural ceremonies, I cast on earlier last week. It took me a few tries. While Cat's tutorial is awesome in how easy the cast on is, I had issues in 1) casting on the correct number of stitches for the pattern, and 2) prevent myself from adding in extras crossings/twists while knitting the first round, all at the same time. It probably didn't help that I tried to learn another new cast on during the same week. 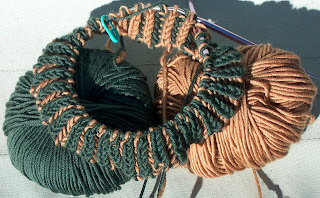 Yup, I started DH's forest green & tan vertically striped hat. It took several aborted attempts on dpns & KP circs magic loop style before I remembered I still had my old Boyes Interchangeable set that would allow me to have a 16" circular. A total doh moment! So much easier to keep the cast on stitches aligned straight while joining the 2-color tubular cast on in the round. It was an absolute PITA on dpns or a much longer circular needle.

It was so frustrating that I cast on what I thought would be a suitable alternate hat for DH in the meantime. 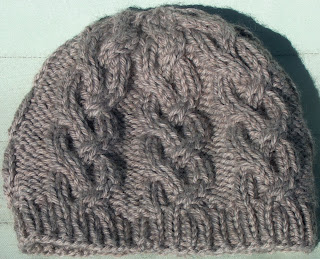 After checking to make sure that he also didn't think cables are "girly" (guess who Monkey1 got that idea from), I cast on & finished in 2 days! Even in between boring chores & tasks. Then DH tells me "It's not green. Or tan." So. Now it looks like that co-worker that half-jokingly asks for a hand-knit item now has one. Or at least he will have one next holiday season.
Posted by Unknown at 10:48 AM 4 comments:

I didn't expect to knit all my kits last year, but somehow I did. 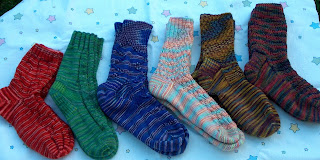 (missing is Monkey1's Sweet Tart's 'cause I can't find it...yet)

The last kit was fun and fast once I focused on it. 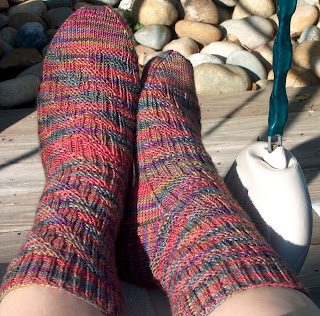 yarn: Socks that Rock medium weight in Muddy Autumn Rainbow - how fascinating what you get when you swish in extra red dye to Fire on the Mountain
pattern: Holidazed by Anne Hanson
needles: size 2 (2.75 mm) Knit Picks Harmony dpns
patten size: medium
mod: only decreased the toe down to 16 sts rather than 8 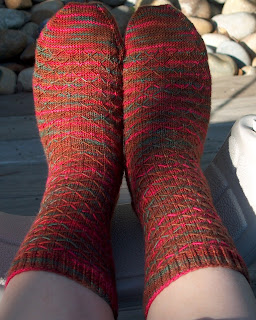 Also completed in Socks that Rock are my Leyburn socks as part of the Socks that Rawk Raverly group's KAL. 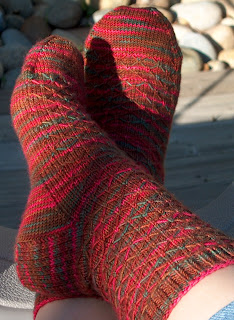 And in between all that, I finished a hat. 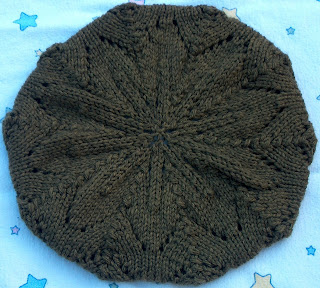 First, our vehicle gets rear-ended on our way to the cabin in holiday commute traffic. While waiting for our state highway patrol to take our incident report, I was too anxious to work on any of my socks in progress and proceeded to cast on for the Meret (Mystery Beret - Ravelry link) in Knit Picks Swish Worsted in Lemongrass Heather. 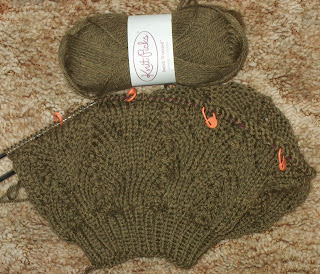 But once up at the relative peaceful quiet of our cabin, I managed to make some progress on my Holidazed sock, my Merlot Vine sock, and even started the cuff of my Leyburn sock. 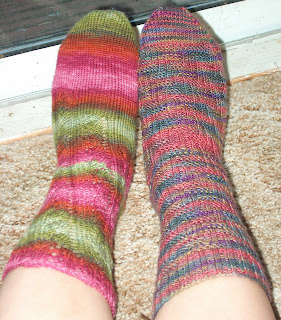 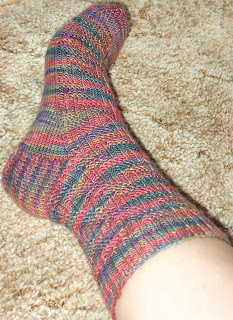 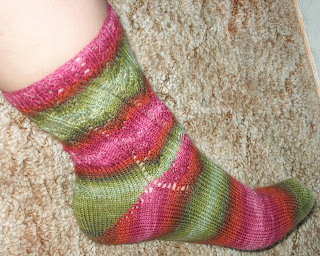 Then, the text at 3:30 am one morning and the subsequent call from my sister later in the day came the news that our paternal matriarch, my dad's mom, had passed away. In the Philippines. A day's drive from Metro Manila. Younger sis is going to represent the family as both my brother & I have young kids and mom just used up her vacation time.

If I had one of those mood indicators up on my blog, it would definitely be set at sucky.
Posted by Unknown at 8:43 PM 8 comments: