In California, summer weather doesn't actually end in September, more like the end of October and then maybe here & there in November. Maybe that's why it seems like I have a lot of cotton yarn on my needles, whether I actually like it or not. 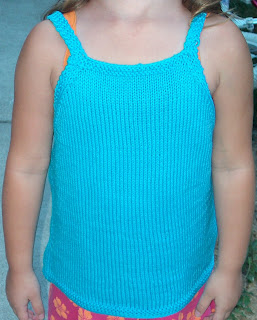 Barefoot Knits tank top in size 6 for Monkey2
Brown Sheep Cotton Fleece in Carribean Sea - I swear I made a dent in this stash.
size 7 KP circs

Mods:
- Converted the pattern into the round 'til the armhole split. While I understand the authors' reasons for knitting flat, knitting cotton yarn in the round is so much more fun than seaming cotton pieces together.
- knitted the 2 straps from one side only and did a 3-needle bind off to attach them to the other side
- currently basted lavender hemming tape to the straps to prevent them from stretching. Will do a more permanent sewing job when I buy ribbon/bias tape/hemming tape in a matching turquoise color. 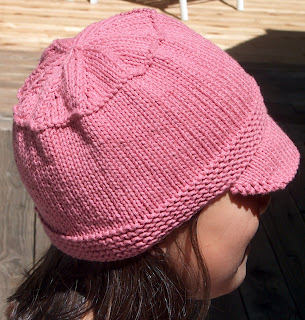 This is actually the second kiddie cadet hat I've made. The first one I made was in blue for Monkey2's classmate who's been fighting stage 4 neuroblastoma since his diagnosis 4 months ago. His chemotherapy & surgery haven't been successful, so we all continue to pray. 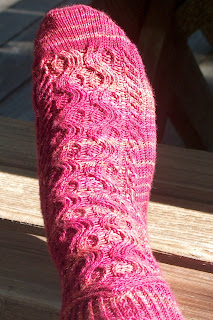 In the "it can feel like cotton" department, I've finally finished my first Digitessa sock in the corresponding Wollmeise colorway that came in Yarnissima's kit. 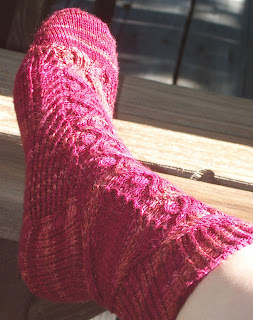 I'm pretty sure my first sock is full of errors even with a bunch of tinking back. Because my row gauge is more compressed than the pattern spec despite using larger needles, I ended up in a different spot on the top of foot pattern when it came time to do the transition to all k1tbl/p1 ribbing. While not as elegant looking as the original pattern, it at least works.

It's one of the drawbacks of putting this sock down and only knitting it while I'm at the cabin. I've actually re-done the bind off at the top of the sock since I took these pics up at the cabin. My first 2 attempts with my usual EZ sewn bind off method came out unusually tight. So I changed the bind off to Yarnissima's which is to bind off in pattern but w/the yarn doubled. Worked like a charm. Now if I can knit the second sock without having to wait 'til our next cabin trip... 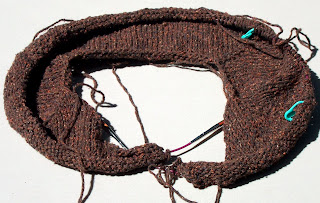 Speaking of taking so long, but I finally re-cast on my Marilyn Not So Shrunken Cardigan. I had forgotten how quick this was as I managed to knit 7.5" worth in raglan length over the long Labor Day weekend. It's the last 3" before the sleeve separation that seems to take forever.

I like having short-cuffed socks for the summer. The San Francisco fog makes for toe-chilling mornings, but the afternoon sun requires shorter cuffs. 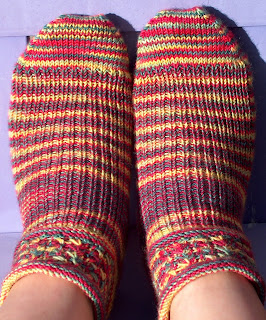 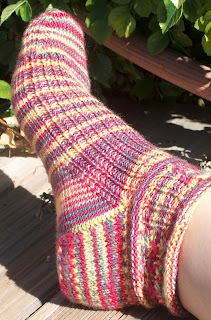 Per Marcy's suggestion, I used MomofTwins' modification of slipping the primary cable on the In Season pattern in the cuff. 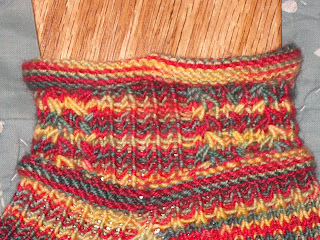 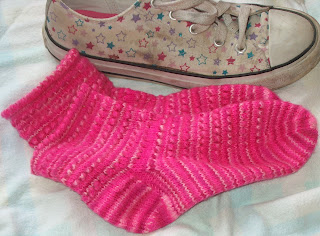 Monkey1 had lost them somewhere but couldn't remember where exactly. All she knew was that she didn't lose them at school. Well, our neighbor found them in her home and as is our habit in finding errant kids clothes, she washed and dried them in her machines before sending it back. The one time when having a good neighbor has its drawbacks.

Of course the replacement pair just has to be the exact same colorway and I don't have enough leftover yarn to make Monkey1 a new pair. Thankfully Hot Flash is still up on the BMFA website so I'll be ordering a new skein. Sigh.
Posted by Unknown at 9:26 AM 7 comments: