Amy Singer from knitty.com is in da house! 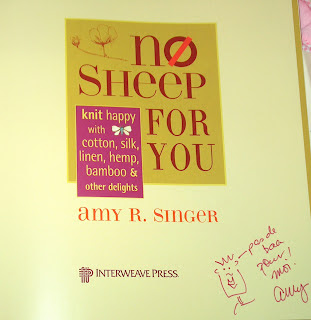 I didn't sign up for Amy's classes at Purlescence Yarns this weekend, but I did get the chance to have her autograph my book and hang out and do a little knitting. It was a blast as I got to witness another Hanna sheep siting. The Boba Knitters are so fun. Too bad I live so far, but maybe one of these days, I can pop in on their Sunday meet up. 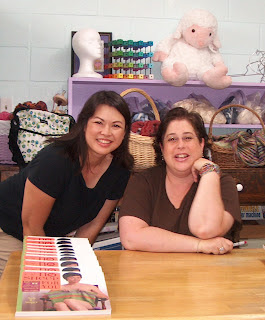 And no trip to Purlescence would be complete without a Socks that Rock purchase. Hidden among all that Fire on the Mountain and other fun lightweight colors was the gem of Jewel of the Nile:

I originally thought I'd be buying a 3rd skein of Panda Cotton since I thought I would run out before I finished the first sock. Luckily I didn't and had a few yards to spare. 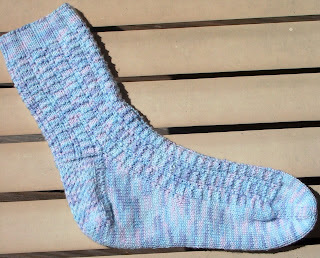 I finally succumbed to the lure of my Rockin' Sock Club yarn and cast on for my Solstice Slip. My first modification has been to do 1" of k3 p2 ribbing on size 0 needles in hopes that'll take care of any looseness on top. 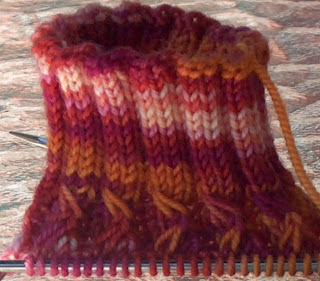 But what I've really been wanting has been to do some lace knitting and the new (and early) Yarn4Socks August sock club package seems to fit the bill. The yarn is Fleece Artist Sea Wool in Sea Foam and the pattern is by Designedly By Kristi. Good thing I finished her Balance Socks pattern. 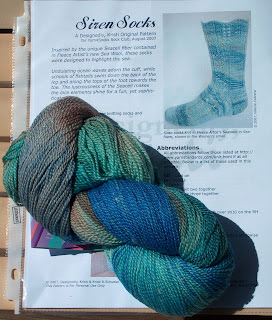 However, I may wind up my BMFA Geisha in Scaponia and cast on for a shawl. I saw some of the Purlescence crew knitting shawl patterns with their Geisha in I think from various patterns from Alison Jeppson Hyde's Wrapped in Comfort. (She was also at Amy Singer's book signing.)

The problem, however, is I don't know which pattern to make. I've bought both the Leaf Lace and Flower Basket shawl patterns and am considering getting Alison's book too. I really like the cut-out circle shape (I forget the correct term) of her shawls.
Posted by Unknown at 5:42 PM 3 comments:

Which Hogwarts house will you be sorted into?

Since all my WIP pics are boring, I decided to see what house I'd be sorted into. I knew I wouldn't be a Gryffindor or Slytherin, but I kinda wanted to be a Ravenclaw. Heh.

I finally saw the Order of the Phoenix Monday night. I had finished book 7 the night before, so it gave some scenes a bittersweet flavor for me. I'm glad I didn't re-read OotP before I saw the movie since I'm sure I enjoyed it more that way, especially with the downplaying of all that whining Harry does at the beginning of the book. It was one HP book I wanted to throw at the wall since Harry's teenage angst was driving me crazy. 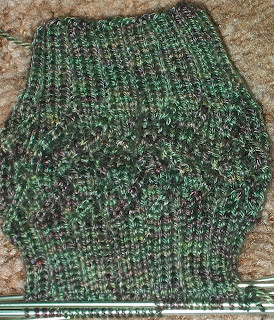 But not at Stitch 'n Pitch. Not much lighting up in the nosebleed seats, so it was a bit dark to work on it. 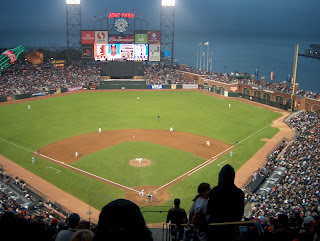 Not a great birthday game for Barry Bonds and an okay SnP goodie bag. Monkey1 did enjoy starting the needlepoint set that was in the goodie bag when she finished her food and got bored. She caught on quick that baseball is boring. I was thinking about going to the Oakland A's SnP (they at least have a better record this year) in September, but now I'm not so sure. 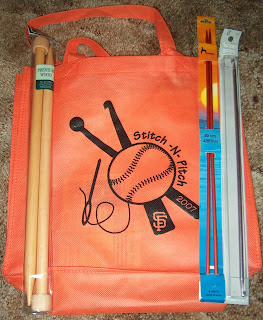 Caught up to where I was before I ripped to re-do the increases on my Something Red. Still not happy with it, but before I stab my eyes out w/my knitting needles over the ribbing, I decided to just plug on and hope they're not so obvious after a wash & block. 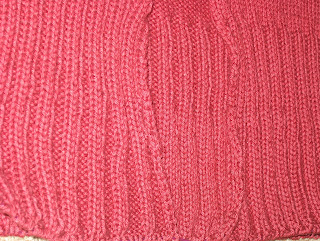 But what seemed truly endless was the gusset section on my Menehune socks. Apparently my rows are short so I had a lot of stitches to decrease to get to the foot section. My gauge is also off so I will run out of yarn before the sock is done. I won't rip & re-do since the sock does fit now. If I re-knit to the pattern gauge, I'll have to go to the large size, but I won't. The yarn is rather loosely plied and I'm not sure how the yarn will be if I frogged and started over. Besides, I can be too cavalier about my frogging. 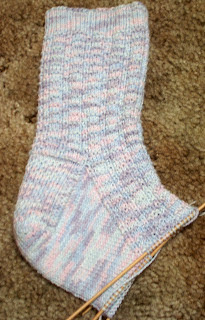 And last but not least, happy birthday tapmouse! She'll have to post her b-day swag since I neglected to take a picture of it before I gave it to her.

Interrupting the WIP's for Harry

Got my book yesterday and proceeded to ignore the house-cleaning and folding the laundry (at least it's been washed & dried) and put my mad speed reading skills into high gear. DH had a refresher course on what I used to do before I knit. ;)

My sister got the book the day before and we vowed not to call each other 'til we knew we were both done. Gotta love siblings that understand the Harry thing. She really hates being spoiled and was beside herself when people at the bookstore proceeded to, not only open the book at the end, but read parts of the book out loud. She did all she could to get the heck out of there with her copy unscathed.

Luckily, that didn't happen to me 'cause I got mine at Costco amidst the Sunday morning shopping rush. And DH thoughtfully stuck my copy in a plastic bag from the meat department so it wouldn't get stained from anything that could leak as he knows how much of a neat freak I am about my books.

For some reason my brain associated horcruxes with the color dark green, so I cast on with Yarn Botanika's superwash merino tencel in Pine Forest. It's thinner than BMFA's Seduction as far as my initial swatching went, so it'll be a nice learning experience for me.

Also in so progress is my Menehune Cobblestone sock. So, so soft. Splitty as heck, but I guess I'm used to it when I've been working with cotton. It's also giving me a nice break from all the ribbing I've been doing for my Something Red (which I've torn back to re-do the increases) and the Horcrux sock.

Posted by Unknown at 8:39 PM No comments:

Stick a fork in me. I am so done! The flower halves have been reunited! 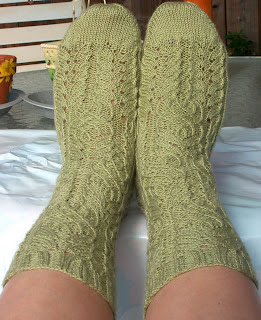 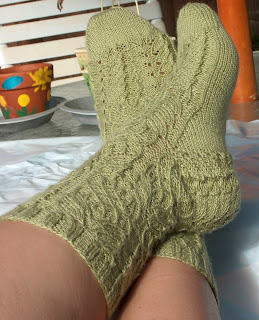 Apparently the skein for my first sock was short anyway on yardage as I had to use the leftovers from the second sock skein to do the toe on this re-knit.

On this last time, the sock obviously went faster due to a comfortable familiarity with the pattern, but also due to finding a cabling w/o a cable needle tuturial that worked for me thanks to Carrie. It's amazing that no matter how perfectly logical and well written the various tutorials are online, what it boils down to is what works for one's style & tension in knitting.

I love this pattern, but it's safe to say that after knitting what would be considered 3 socks, I won't be doing this pattern again in my lifetime. Well, at least for a very, very long time. 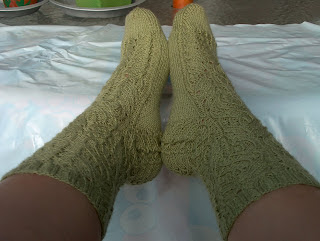 Off to ribbing island on my Something Red cardie and a Horcrux sock, though I'm already tempted to finally cast on for my STR club Solstice Slip socks. I should get back to my Menehune Cobblestone sock though. 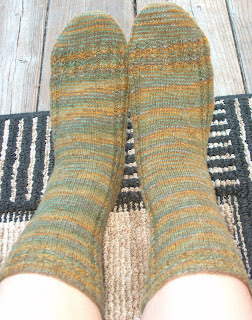 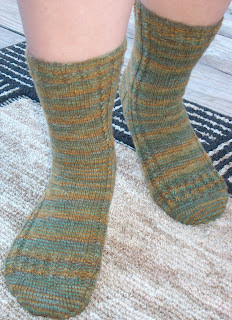 Random Project Thoughts:
Between the stiffness of the yarn and the left twist (ktbl in the 2nd st, k 1st st, then drop both off), it was slow going on the left sock. I still enjoyed this pattern so I think if I do another one (it came in sizes child, S, M, L) in a squishier stretchier yarn, it'll go a bit faster.

The yarn was a good learning experience, but I wouldn't buy it on its own if they keep the heavily fragranced softener. I'm assuming they used the softener due to the stiffness I've mentioned before, but it took me a long time to geting around to knitting with this yarn because the smell was so off-putting to me. I'm guessing the camel must be much lighter that regular wool since it came in 2 oz, 300 yd hanks, but it didn't knit up super fine like Scout's BFL I've swatched around on. I had a lot left over from both Y4S skeins for both socks.

eta: I just rinsed the socks over the weekend in a vinegar/water bath which I should've done in the first place to get rid of the softener smell. (Thanks, Batty for the reminder. I'll need to do this on the next yarn that's either smelly or stiff.) The socks themselves aren't appreciably softer, so I think the stiffness is a property of the camel down. Time will tell if it'll soften with wearing.

Next up, the Twisted Flower re-do! I've finished 1 repeat of the leg chart and would finish the 2nd 'cept I have to do that real life thing called folding laundry.
Posted by Unknown at 10:23 AM 1 comment:

Flashing stuff I recently got: 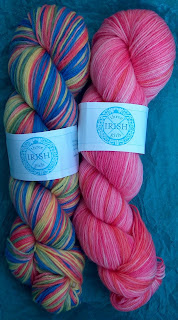 Three Irish Girls (formerly Irish Baby Knits) Caitlin & Megan Adorn sock yarn. I am a sucker for these particular Irish/Celtic names. Caitlin had to be special ordered since it's no longer listed on the site. 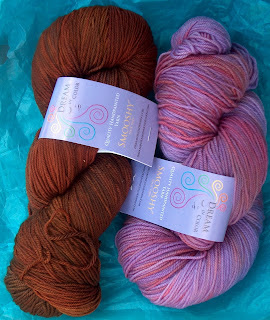 Since I couldn't justify paying the shipping on the 2 Dream in Color sock patterns only, I snagged a couple more Dream In Color Smooshy yarns in November Muse and Wisterious. Chosen solely on the fact that as eye shadow colors, they'd be awesome...just not together. ;) Well, I take that back. I might (read my favorite Nars MA might) be able to. 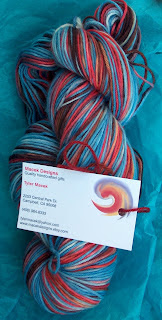 From Tyler, his hand-dyed sock yarn in Chocolate Paradise as a thank you for testing his sock pattern that he entered into the Hill Country Yarns sock pattern contest.

And what I've been listening to since I got back from vacation: 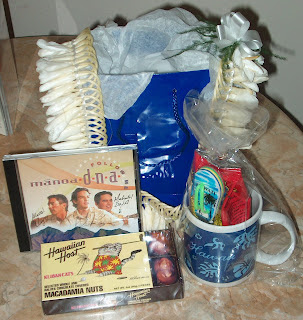 Manoa DNA played at my friend's reception and we got their CD in the cute gift bags the bridge & groom gave out.

How much knitting I can get done on the flight from Oakland to Honolulu: 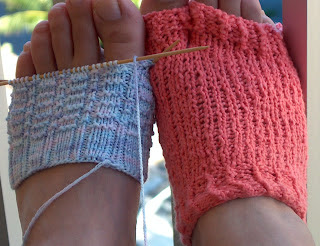 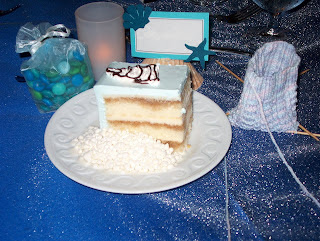 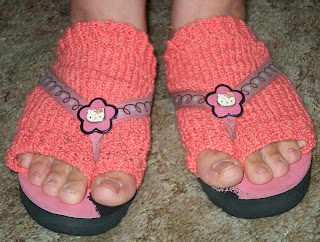 Did the second AZ flip flop (or as they're called "slippah") sock during the trip and finished it off at mom's the day before I flew back. 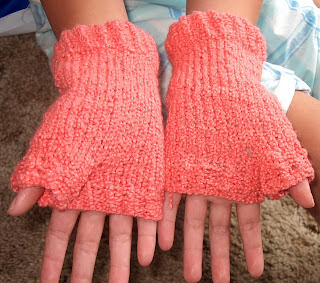 Not too thrilled at how loose the Star knitted up, but Monkey1 thinks they make great wrist-warmers so they stay & won't be ripped & re-knit. 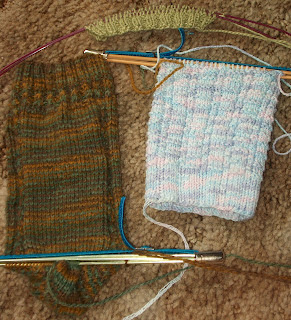 Didn't get too much of the Menehune Cobblestone sock knit on the trip back as I developed a headache and I won't be working on it 'til after I finish the left Balance sock and the re-do of the first Twisted Flower. 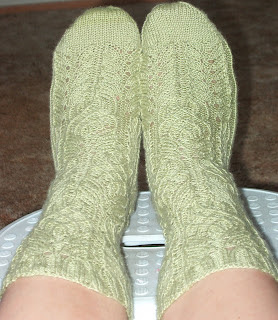 I've probably gone off the deep end in ripping Twisted Flower sock #1 when I decided to tie a story in with the process. The legend of the naupaka popped in my head while contemplating to rip or not to rip. It is one of my favorite childhood Hawaiian legends. Nothing so tragic as the classic story of two lovers from different classes/worlds being torn apart with only a glimmer of hope of them ever getting back together again. 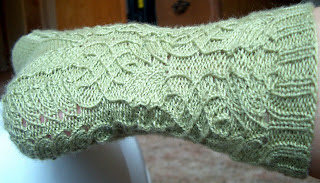 (The heel isn't perfect, but I love the stitch definition the Louet Gems Pearl gives.) 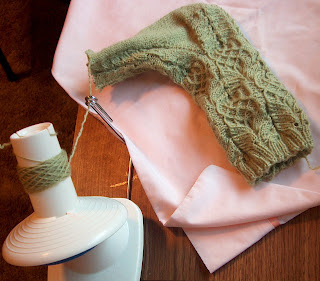 My favorite part of the legend being if you collect the beach naupaka (the commoner man) and the mountain naupaka (the royal lady) and put them together that you could once again reunite the two lovers. 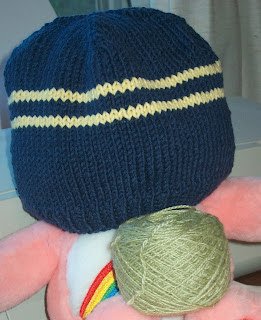 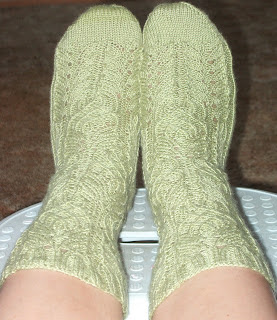 P.S. Toddler hat modelled by Cheer Care Bear (the soccer ball is MIA) knitted from the free pattern on the Charmed Knits KAL. I used the orphan blue (shade #219) and yellow (shade #216) Rowan All Seasons cotton yarns purchased from Article Pract's big sale last year. No orphan "bronze" or "gray" skeins, so my Ravenclaw beanie had turned into a Cal Bears beanie.