Corella Tam & then some

While I've been off a week with the Monkeys, I've been busy with knitting and a few other things. 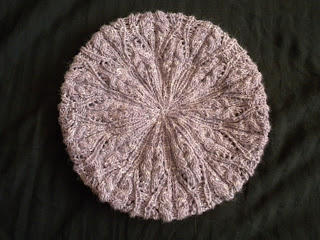 I finally finished my Wooly Wormhead Mystery KAL for at least one of the hats.  This is my second shot at this since my row gauge on my first one was too long and I errantly decided to go up instead of down a size. Evidently I'm not as big-headed as I sometimes think I am. LOL! 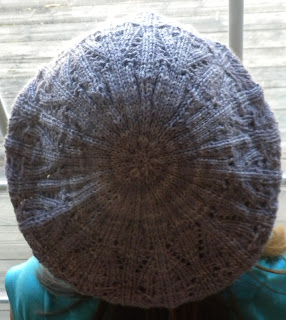 Monkey2 was not in a cooperative mood 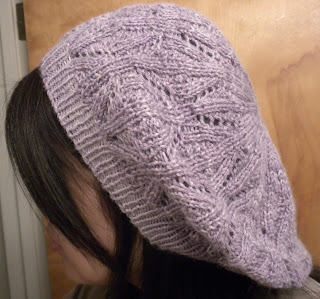 pattern option: Alternate Cabled Cast On.  I like!
mod: 1 extra half repeat in the body 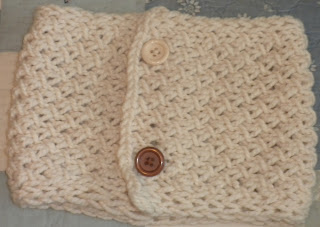 Being in a contrarian mood with my gift knitting, I decided to start a few bulky & super bulky cowls & scarves after the Christmas holiday. I figure they will be an early start for next Christmas or late gifts for those we didn't get to see by Christmas. One is completely done, but the other 2 need to be washed/blocked and buttons sewn on. 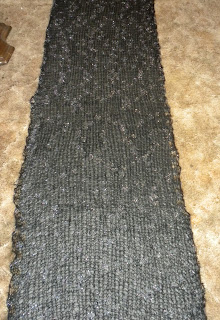 Like Monkey2, Monkey1 is too busy playing to model her stole. So all I've got for now is a pic of the stole starting to be laid out for blocking.

At the beginning of 2011, Monkey1 saw a Fashion Knit store sample and wanted to knit it so we bought the yarn & needles.  The pattern is simply to CO 50 sts on size 17 needles & knit until the 2 balls of Karabella Gossamer yarn are used up. Monkey1 started this, but soon found the needle size too cumbersome and the yarn too fiddly to knit. I didn't want this to languish as a UFO, so I've been picking it up off and on throughout the year and finally finished this as well.

Hope everyone is having a happy holiday season.  Happy New Year!

When Urban Decay started to give hints online that they were releasing a second Naked Palette, the online makeup world got really excited. I definitely got caught up in all the excitement and rather than wait for others to buy it and post their experiences about it, I succumbed and ordered the Naked 2 Palette along with the other first 4999 buyers of the palette on their website. 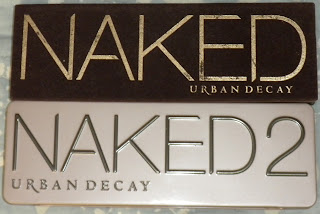 Unlike the Naked 1 Palette, the Naked 2 Palette did not come with a travel-sized Potion Primer.  Instead it came with a mini-Lip Junkie Lip Gloss in Naked (sense a theme?). Also, the first online buyers also got a mini-sized 24/7 eye pencil in a gold color (El Dorado). 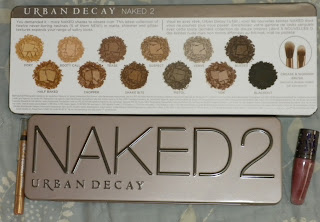 Along with a ton of other bloggers, here are my pics of the 2 palettes opened showing their different synthetic brushes.  I was not able to buy the first Naked Palette when it originally came out with a double-ended eye pencil, but did get the later release when they replaced the double-ended pencil which caused innumerable production delays with a basic synthetic eyeshadow shader brush. The Naked 2 brush is double-ended with a fluffy blender brush and a skinnier shader brush. 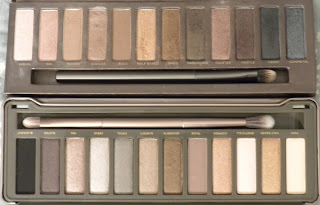 And here are the eyeshadows swatched on my arm over a very thin layer of UD's Potion Primer.  The Naked 2 shadows are on the top row & the original Naked shadows are on the bottom row.  For reference, the foundation swatch on the left end of the top row is MAC's Mineral Skin Liquid in NC37 & the foundation swatch below it is NARS Sheer Glow in Punjab.

Overall, the Naked 2 palette colors are more taupe-ish & cool compared to the Naked 1 colors, minus the Half-Baked (goldish) eyeshadow which is present in both palettes. But for very cool-toned makeup-wearers, Naked 2 may still be a bit too warm-toned.  Also, Naked 2 has 3 matte shades (Foxy, Tease, and Blackout) compared to Naked 1's 2 matte shades (Naked and Buck).

My initial verdict is that it's a really nice palette, but if you like warm-tones, stick to the Naked 1 Palette.  I've worn the colors of the Naked 2 palette on their own once & it's okay, but I will need to work with it more and perhaps combine it with colors from the Naked 1 palette to get a look I'll be happy with.

Now switching away from Urban Decay to Mary Kay, below is a swatch sheet of the new colors for MK's Winter 2011.  I had attended an event with my Mary Kay consultant and was able to swatch them for reference.  The eye and lip pencils will now come with a tiny shaper/sharpener in its cap and they'll be a mix of new & existing shades.  However, if you're a fan of MK's Dusty Pink lip liner, you may want to contact your local MK consultant as it looks like they discontinued that shade for a new one called Soft Blush. 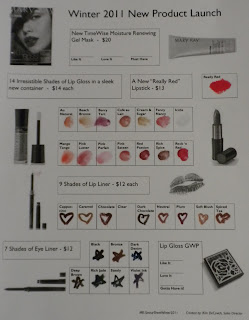 Back on the knitting side of things, I've timed out a tam I was working on 'cause I knit it too big (my row/round gauge was all out of whack 'cause I didn't swatch!) and I'm in the middle of knitting a sample pair of socks for someone. But in the middle of all that, I knit up a quick pair of fingerless mitts from my leftover Malabrigo Twist in Liquid Ambar: 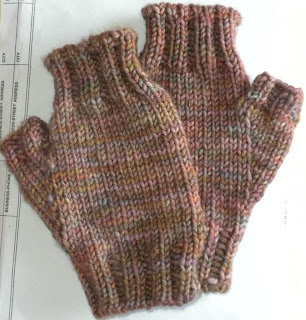 Pattern: 75 Yard Malabrigo Fingerless Mitts
needles: size 8 & 9 Clover bamboo dpns
mods:
- had enough yarn for thumb "sleeves" so didn't bind off those stitches per pattern instructions & instead put them on waste yarn & later knit in a few extra St st rounds & ribbing.
- tubular 2x2 cast on (Ysolda's) & bind off on the body of the mitts - just to practice
Posted by Unknown at 3:06 PM 3 comments:

I love test knitting for my friends, so I said of course when Cockeyed asked me to test knit a cowl in one of her design series. 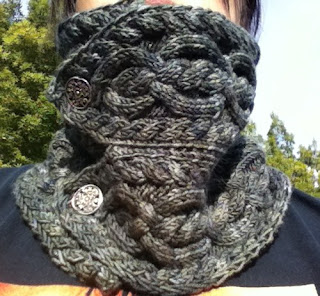 pattern: Erin's Cowl - Available as a separate pattern or in a 3-pattern set (the cowl, Erin's hat, and Erin's mittens) 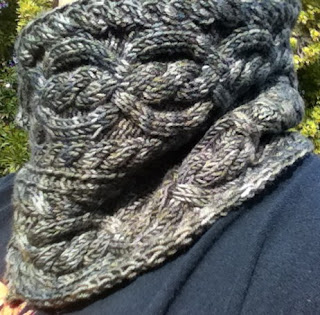 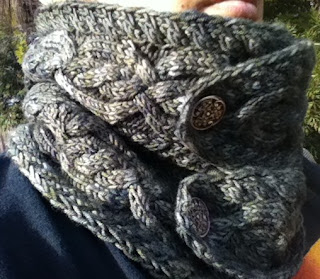 mods: none since it was a test knit
Posted by Unknown at 2:23 PM 2 comments: