I had the pleasure recently of sample knitting an infinity scarf version of Irishgirlieknit's Pont Neuf pattern.  But because it was a rainy weekend when I knit it, I don't have a nice dry outdoor modelled shot of the scarf before I sent it off to Carrie.
At the time she was headed to Stitches East & I wanted the scarf to get to her before she flew out.  Luckily I had my last furlough Friday and the rainy (not misty) weather meant we didn't go out much and stayed indoors, so I had lots of knitting time.  'Cept during the baseball playoffs which was too stressful.  There was a reason the SF Giants fan buzzword this season was "torture."
﻿ 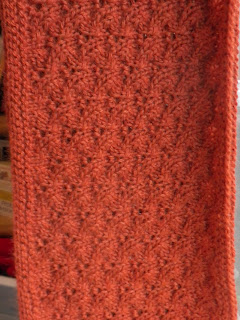 details -
yarn: Kollage Solace in Chili - 3.1 skeins
needles: size 8 KP Harmony circs
no mods since it was a sample 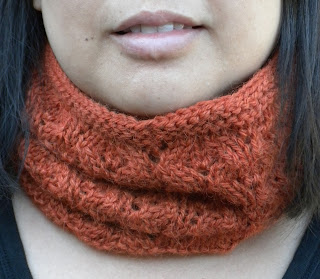 Since Carrie & Kollage sent me 5 skeins, I ended up making the cowl version with the remaining 2 skeins, but I still had just under a half skein left.  Since Chili is not one of my go-to colors, this cowl will get gifted. 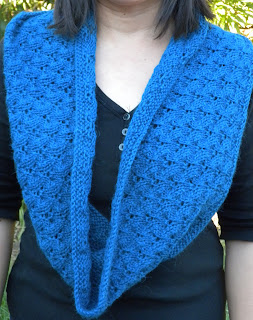 As payment, I got 5 skeins of Kollage Solace in Seaport, more in the color palette that I'm comfortable with & love.  So, I've gone ahead and made myself my own infinity scarf.  However, I did knit it at a more leisurely pace and not the 3 days I took to knit the first scarf. 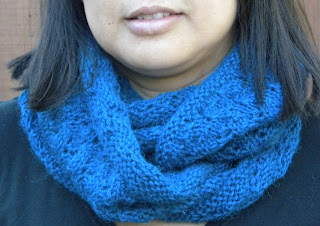 I did add a couple more repeats of the pattern so the scarf would hang a little more loosely when I wear it doubled.  Any more than 2 repeats and it would've been too long for my height when worn singlely.

I still have over 1.5 skeins left, so I'll probably make a pair of coordinating fingerless mitts or hat with the scarf instead of another gift cowl.

Pont Neuf has a nice 8 stitch lace repeat, so it keeps it interesting for more experienced knitters but isn't too tricksy for newer knitters.  Give the pattern a look-see if you want to knit an infinity scarf that isn't too boring.
Posted by Unknown at 3:09 PM 5 comments: