Don't get any ideas.

Yes, I'm talking to you, all my spinning friends! 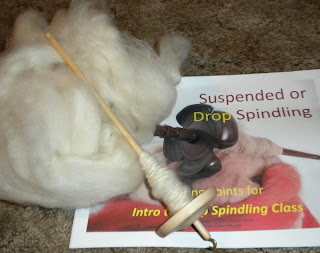 Just because I'm taking a class doesn't mean I'm hooked. Especially since my practicing in between the 2 sessions seems to be getting worse instead of better. :p But that reflects nothing on the sweetheart of a teacher who is Wonder Mike. I just think that the Yarn Harlot's rule of thumb that you have to practice a skill for 28 days straight before one gets anywhere near decent definitely applies to me. And then some.

At the moment, it's not a relaxing thing to do. It seems to have a way of bringing up my control issues. At one point, I looked at some messed up fiber and contemplated pulling out my metal eyelash comb to re-comb it so I could re-spin it an effort to not let it go to waste. It's good thing the call of dinner-making duty kicked in and I let that crazy thought go. 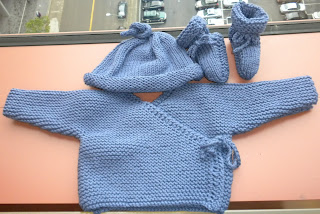 But before testing the waters in the world of spinning, I managed to finish a baby gift set that I started after the baby was born. I was stuck on inspiration when I didn't know what gender the baby was 'til after our friend gave birth. 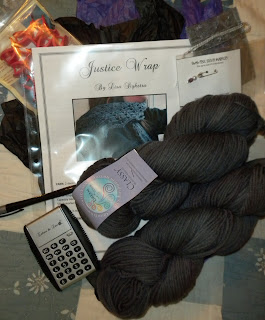 Lastly, It's hard not to cast on while I'm working on my UFO Smackdown when I got my second to last Embrace the Lace club kit, so I'll use it as motivation to finish. The yarn is Dream in Color Classy in an exclusive Woolgirl colorway w/a pattern by designer Lisa Dykstra, who's been Woolgirl's designer of choice for quite a few of her club & special kits. I'll be sure to send healing thoughts her way when I knit up her patterns.
Posted by Unknown at 7:13 PM 7 comments:

I finally finished this pair that I started during the BMFA Blue Moon cast-on. It's still raining so no pics of my sock pair right next to the river rocks in our backyard. 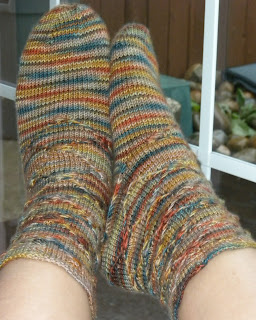 Mods:
- 1 extra diamond pattern on the leg. Had 55 g of yarn leftover so the potential was there to make the leg even longer if I wished
- Decreased to 54 sts for the leg. I think I finally close to my magic numbers to keep the medwgt STR from pooling. I've always pooled/flashed w/this weight & only rarely stripe. 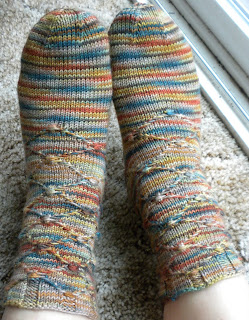 I've got 2 RSC 2009 knits to knit up before RSC 2010 starts. I wound up my Nov RSC yarn & started on Cookie A's pattern. I still need to knit up the Jan RSC yarn, but I've hit a wall wrt having beads on it, even if I go with the fingerless gloves or mitts I'm thinking of going with instead of the socks.

I'm debating with myself if this should be the first year (out of 3 so far) that I won't do all the patterns. As much as I love My Blue Heaven, the Jan RSC yarn, my motivation to knit it up is nowhere to be found. So not like me to do that. Maybe if I complete the second half of a UFO'd mystery stole w/bead, I'll find the motivation. It is UFO Smackdown time anyway. We shall see.
Posted by Unknown at 11:16 AM 4 comments:

The good, the bad, the ugly

The good: from the Once in a Blue Moon Rare Gems sale at BMFA - 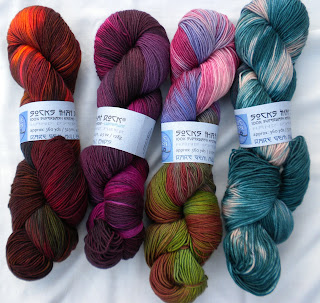 All lightweight, one in each category (Earth, Fire, Air, and Water), not necessarily in that order since I think Tina & her dyers based the categories on what dyes and overdyes were used, not necessarily what the end result was. I love them all, but if I had to pick favorites, they are the 2 intensely deep ones on the left.

Also good: The first Knetted sock I cast on for the Blue Moon Cast On - 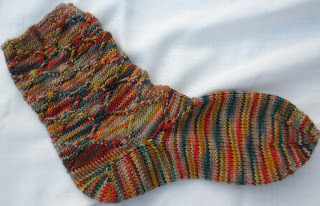 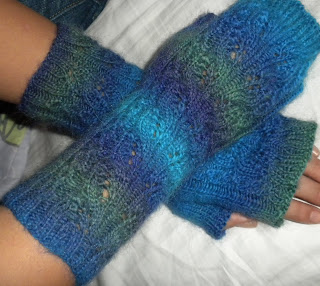 When we got back from vacation, I realized that the light turquoise was very sparse to almost non-existent in the second skein. The second half of the first skein & most of the second skein had a royal blue instead of the turquoise, so I punted the idea of getting both mitts to match color progression at all.

I do like the pattern & the colorway though, so that's good. The bad however was the yarn. It's splitty, the single ply is underspun in spots & I had to spit-splice it together many times, and it behaves like sticky mohair when attempting to frog or tink back a bit (looks mohair-ish too w/its halo). Maybe if I knit my Noro sock or sample Malabrigo sock, I would feel differently. Or even if I got a second generation of the mini-mochi instead of the first? Who knows, but it'll be awhile before I knit up the second skein. 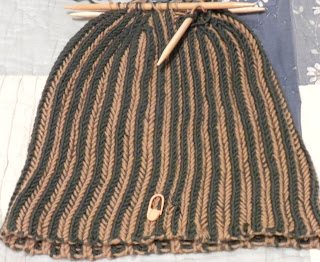 It used to be a completed Brioche Hat for DH. Then he asked me to extend it - several months after it sat in a dresser drawer in our cabin upon completion.

The bad part's not that I started slowly frogging it from the top even though I don't remember much on how a brioche stitch in progress looks like after several months. It's the stitch that snagged on something in the drawer he kept it in. It's to the right of the orange stitch marker, an inch from the cast on row that is currently causing me much angst. So, to fix that somehow (duplicate stitch for 2 inches on each side of it?) or to frog entirely & start over? That is my dilemma.

The ugly, though I could call it a swatch since I intend to frog & start over, but probably in a different pattern, maybe something stripey instead:

Sometimes I should say no to Monkey1's requests when I feel it probably won't work. It was a bad combination of needle size, gauge, yarn and pattern. I didn't bring my entire needle set when we were vacationing, I had limits but tried it anyway. I did like the initial pattern & yarn combo on size 5 dpns, but that made the headband infant-sized and too stiff to work as a headband. I probably should've started a stripey scarf instead, which is what was intended for the leftover yarn. Knitting on size 7 circs Magic Loop style made the colorwork look really crappy and made keeping the floats even at the transition halves w/this yarn difficult.

Hopefully next time I tell Monkey1 it won't work, she (and I) will believe it and I won't need to "swatch" to prove my point. But then, that's par for the course in the parent/child experience.
Posted by Unknown at 9:12 PM 5 comments:

We got a little bit of snow. Just enough for a little snow angel & snowman-making. 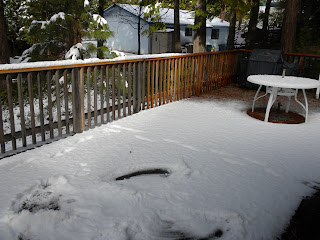 After what seemed like an infinite amount of 2x2 ribbing, I am done with my mother-in-law's belated holiday gift: 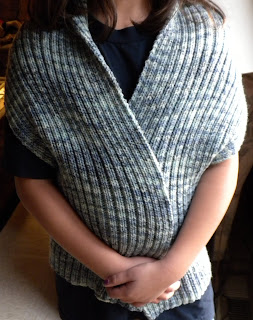 Seamingly Simple Vest
Cherry Tree Hill Twister in Waters Potluck (assuming it's the same base yarn as BMFA's Twisted) - I think this is discontinued by CTH
size 10 KP Harmony circs
size: to the waist as my m-i-l is a petite lady 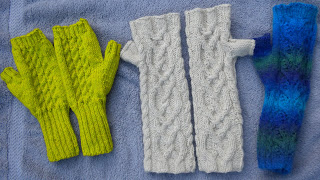 Finished 2 pairs of gift mitts and half of Monkey1's mitts , mainly because I forgot to bring the second ball of yarn to match up the color progression per Monkey1's request. All in need of a wash & block, though I did steam block one of the Evenstar fingerless mitts just to see.

On the left:
Fine Cabled Mitts by Anne Hanson
Koigu KPM in a blinding chartreuse - I have no idea what to set my camera to so it doesn't fuzz out
size 3.00 mm KP Harmony dpns
small/med size 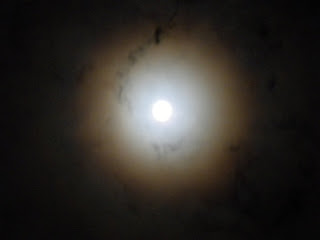 And on New Year's Eve for the Blue Moon Fiber Arts Blue Moon Cast On, I took a picture of what the blue moon looked liked up in the Sierras and I cast on the only BMFA skein I had with me: 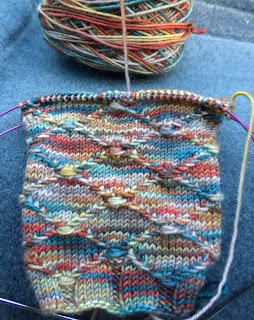 Hope everyone had a Happy New Year's weekend and best wishes for the upcoming year and new decade.
Posted by Unknown at 4:31 PM 6 comments: