I finally got around to knitting a hat to match my Ishbel Shawlette. 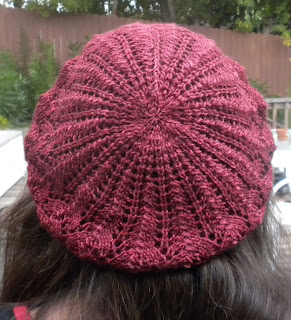 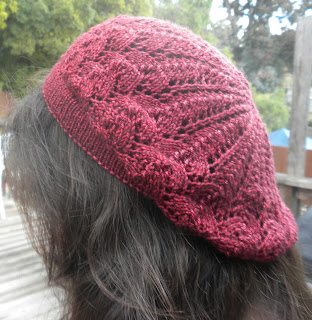 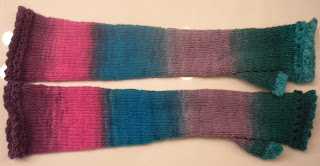 I love Knitwhits colorways & had actually bought a couple skeins from her booth at Interweave Lab in San Mateo last year. I bought more this year, but this time I actually knit them up for Monkey1. 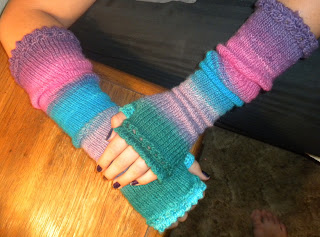 Pattern: Victoria Gauntlets
Yarn: Knitwhits Freia Fibers Flux Sport in Ultra Violet
needles: US size 7
No mods though when I make myself a pair, I'll have to add at least 2 more stitches since my hands are wide. 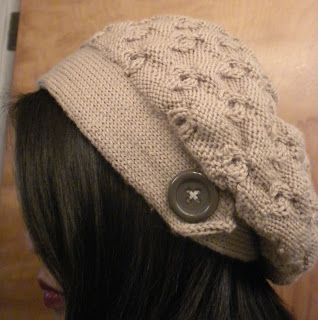 It was that time of year when Wooly Wormhead holds her Mystery Hat Knit-along &; once again I joined up. I stash dove for this yarn as I decided to join after shopping at Interweave Lab market. The only problem I had with this yarn was that one of the ball in the bag I bought from a lys closing a few years back had a lot of breaks in them. After the 4th break, I had to tink back a few rows & use another ball. Thankfully, it looked like the rest of the balls in the bag & the yarn in the plastic bin they were stored with were all fine. 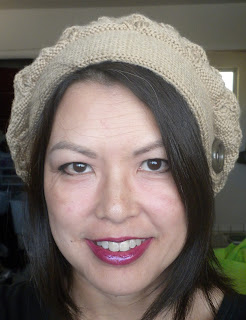 Pattern: Wooly Wormhead Mystery Hat KAL 2012
Pattern size: Large
Yarn: Lana Grossa Numero Uno (discontinued) in color #112
Needles: US size 5 & 6
Mods:
- Picked up stitches on a 1:1 row ratio & then did an increase row in purl to get the desired number of stitches for the body of the hat after knitting the brim. Added an extra repeat of the body pattern since my stitch gauge didn’t match the pattern & I wanted to make sure it was more beret-ish instead of beanie-ish.
- Added 3 plain rows to the crown decreases.

The knitting on these mitts were finished in September, but I didn't get around to seaming them closed & adding the buttons 'til today.

Pattern: All of 'er Buttons Mitts from the Jan 2012 Rockin' Sock Club
Yarn: Socks that Rock lightweight in HRH Crown Princess of Purple, Violetta
Pattern size: Large & long
needles: US size 1.5 mm, I think? I totally forgot to put the specs in Rav when I cast on

Mods:
- 2 extra repeats of the pattern on the hand portion after the thumb gusset as is my preference.

- Extra cable cross on one of the mitts. DH calls it my ‘signature.’ LOL!

I didn't know there was a beret to go with Ishbel. That is pretty! You have been busy with the accessories. Warm hands and warm heads are a good thing.
Happy Thanksgiving!