While my friends here and there were getting ready for Stitches West, I finished a few things. 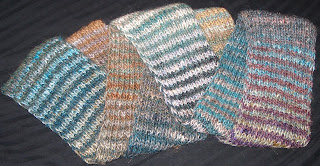 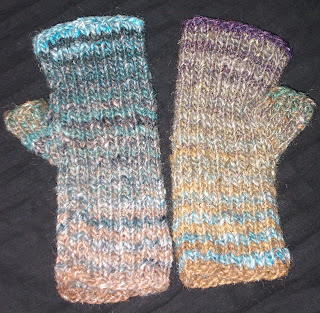 The second mitt came out a little shorter due to the thick/thin nature of the yarn, so if they don't even out after a wash & will re-knit an extra row onto the second mitt. 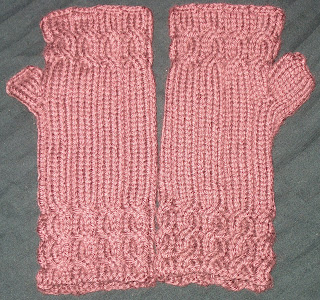 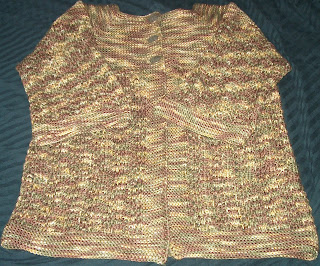 February Lady Sweater - medium
Miss Babs Worsted in Pookie - 2 yowza-sized skeins
mods:
kfb instead of M1's for the raglan increases just for fun
slipped the edge stitches wyib for the garter bump
Nancie Wiseman's modified one row buttonhole from her The Knitter's Book of Finishing Techniques

The sock knitting mojo is on a wee mental break. That and I simply cannot motivate myself to work on my Digitessa sock for more than 1 row at a time. Even after I color-coded all the travelling stitches on the chart. 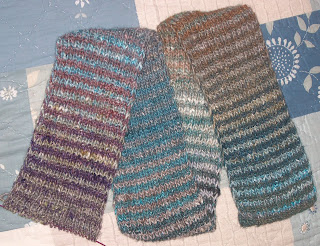 I've joined the lemming masses and am now a proud owner of the infamously popular Noro Striped Scarf (colorways 244 & 268).

The FO photo will have to wait 'til the scarf finishes drying after its soak (w/Soak!) & hair-conditionered rinse (a little Noro trick I learned on the old yahoo Clapotis group). 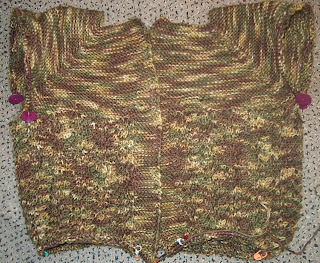 My other lemming knit, the Lady February Sweater, is cruising along. I'm using Miss Babs superwash worsted (yowza skein size) in Pookie, but they way it's knitting up, I'm mentally referring it to my tropical camo cardie. It's much more variegated and green than I expected it to be when I ordered it. I'm sure the gull lace section will look better than its current scrambled state once blocked. However, if I do this easy pattern again (provided I just didn't jinx myself right there), I would go for a bit more semi-solid colorway. 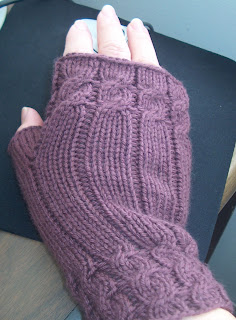 And just to keep myself from buying/ordering more yarn 'til Stitches West (Eeek, next week already!) and Sock Camp, I went "shopping" in my stash and decided to use the UEU (Use Everything Up) concept from my makeup group. I pulled the remaining 1 + maybe 1/2 skein of Debbie Bliss Cashmerino Aran leftover from my Twist cardigan and cast on for another pair of Fetchings for myself.

I had considered making fingerless mitts w/a cable pattern matching the Twist, but I wasn't sure I would have enough and decided to play it safe. Besides Fetchings are a fast knit.

Nothing like having a cold as an excuse to forego household chores and lay in bed & knit. At least I got the laundry done this weekend. 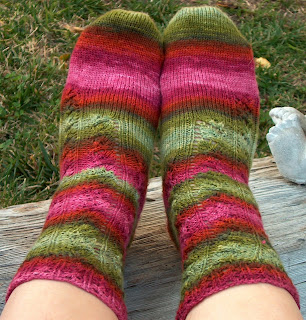 I actually finished this after the weekend 'cause I left the second sock at work. I love this relatively easy pattern, speaking as a lover of lace knitting (or knitting lace). I have half the skein (50 g)of yarn leftover. Plenty for a pair of fingerless mitts later. I won't do the matching lace pattern though as it biases. 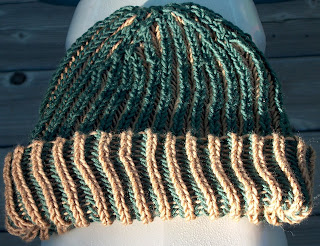 Thankfully finished before the Superbowl game since it was actually a rather exciting one to watch, especially from a neutral party perspective. My DH is happy and appreciative of this hat, especially with the little hunting I had to do to find the right combination of "forest green & tan" that he specifically wanted and all the grumbling he overheard as I worked on it. I had a doozy of a time trying to keep the 2-color Italian tubular cast on from twisting around when I joined in the round for this hat.

The only quibble I have is that because I chose a yarn based on color rather than matching the weight that was spec'd in the pattern, my stitches, especially in the crown decreases look awfully wonky. I hope that a good wash & block will smooth them out. 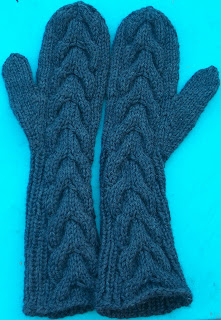 Since I left my second Merlot sock at work, I wanted something to alternate w/DH's hat and cast on for these adorable mittens. (I can hear my sister laughing at the geekiness of this.) A very clever knitter reverse-engineered the pattern from analyzing various movie promo pics and who knows how many viewings of the movie. The pattern is super quick and easy. Love it! 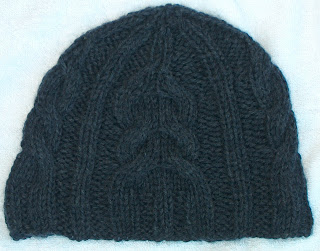 The mittens were such a quick knit I decided to knit the hat designed to match the horseshoe cable pattern in the mittens. Also quick & easy! I cast on during the Superbowl game 'cause I could barely get 2 rows of my Digitessa sock done correctly while watching.