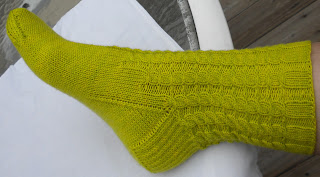 But first, I re-did the sock I tried to improvise earlier this summer based on the cable pattern in Anne Hanson's Fine Cabled mitts pattern. This time I cast on 72 sts for the leg & decreased back down to 64 sts for the foot. 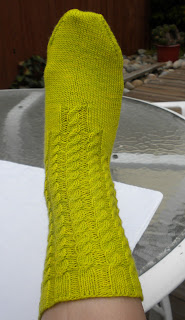 It's much better fitting this time, but I've still decided to keep this for myself and knit a matching pair of Rib and Cable socks in a different Koigu colorway for my friend's partner. 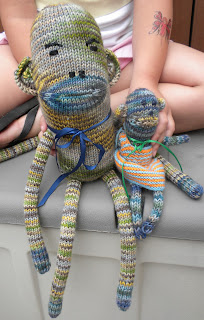 But before I do that, I got sidetracked into knitting the larger Funky Monkey, reversing the colors from the smaller one I knit for Monkey2 awhile back. I had forgotten how fast this was, considering that's a lot of tube knitting for the tail, legs & arms.

mods:
- The accidental one was to knit the mouth, butt & tail on size 4 needles that I grabbed inadvertently. I did like the fabric, so I knit the legs & arms with the smaller needles as well.
- Also with the smaller needles I didn't need to double the yarn for the legs.
- Another accidental mod was to forget the one round of decreases before closing the feet. But since it didn't seem like it mattered, I left them.
- My only intentional mod was to pick up & knit the arms on, as I had learned at Sock Camp with the mini funky monkeys. 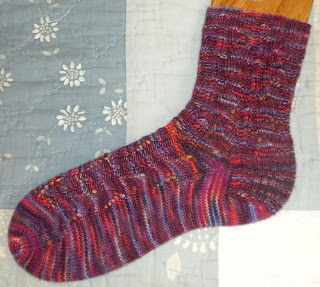 Just in time for our September Rockin' Sock Club kit to get here soon, I finished my first July RSC sock. I chose Linda's Dusty Corners in support of the lovely designer who I met at Sock Camp a couple years back. I figure I can knit Anne Hanson's pattern in another berry-ish STR colorway anytime.

The leg's a little snug, so I knit the heel flap a tad longer to help get the sock on. I loved how the colorway knitted up in the pattern that I was reticent to frog & start over on larger needles (2.50 mm instead of 2.25 mm) or in the next size up (large).

It's a tad too warm to take a photo of the sock modelled on a human foot, so I'll try to do that when I'm done w/the pair.
Posted by Unknown at 4:08 PM 5 comments:

My FO's seem to accidently have a green colored theme. 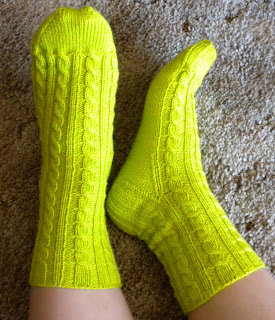 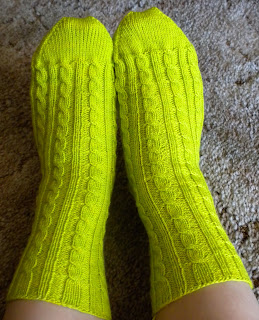 It's a good thing I don't have this friend online so I can share. I am still debating on fixing the other acid green Koigu sock where I tried to carry over the cable pattern from Anne Hanson's Fine Cabled mitts pattern. I'm trying to decide if her partner should have a coordinating pair in the same colorway or if I should do a second pair of the Rib & Cable socks in a different color like red (still in Koigu) or blue (not Koigu). 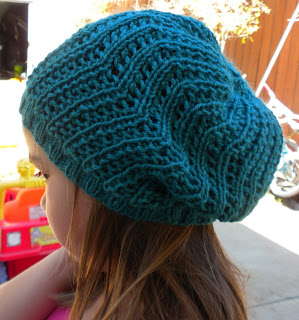 For no one in particular, so I'm adding to the gift stash. I wanted to give the Stitch Nation yarns a try. It helps when they provide a single skein pattern.

I still need to wash & block it, so I don't know how much this will grow yet. 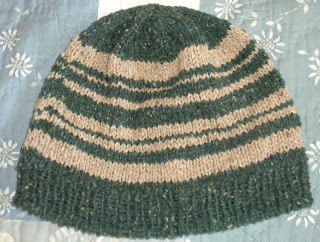 And for Team Twilight, something like the hat Bella wears in the Eclipse movie. The yarn was on sale at a local yarn store & I like these colors together even though they were not an exact match to the movie hat.