Despite repeated reminders from tapmouse that Kaci, the designer of the Cedar Creek pattern, likes really snug socks, I went ahead and used size 2.25 mm dpns since I know I can get the stated gauge of 8.5 spi on them. What I should've done was to use size 2.50 mm dpns, at least after the picot hem, especially since I couldn't even get this little bit of the sock onto my heel, let alone past it.

But since tapmouse also found an error in her Pisgah Cedar Creeks, she's ripping along with me. I will miss those skinny brown stripes when I go up on my needle size, but I also don't think I'll mind the fatter ones I believe I will get. 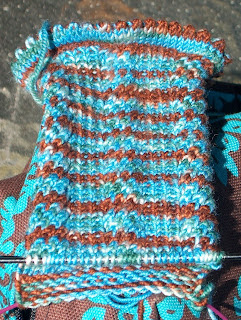 On the bright side, I finished hint #7 of my SotSii. Only 2 more hints to go and I'm only 2 weeks behind the end of the KAL. Not too bad. It could've been a lot worse. Not sure if I can finish this by the weekend, but I'm going to try since we have Monday off. 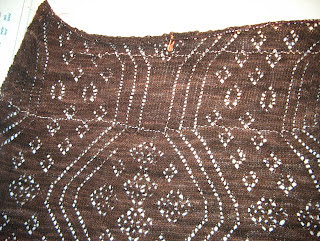 And on the even brighter side, I got my April Yarn4 Socks kit with a pattern by Ann Hanson and some very pretty Herb Robert colorway from Woolen Rabbit, which I've never bought before. 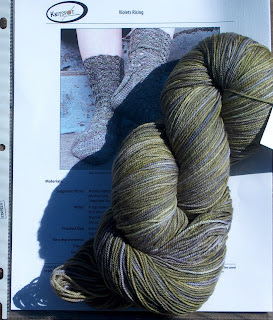 While hanging out on the Ravelry Socks that Rock group board, I somehow ended up joining an informal Cedar Creeks KAL with Braun's Woods in lightweight. Since I didn't get my March Rockin Sock Club kit on Saturday, I spent time working on this sock. I'm surprised I haven't made too much progress on this sock though. Clearly I'm very sick when knitting my SotSii was easier going than my sock-knitting. 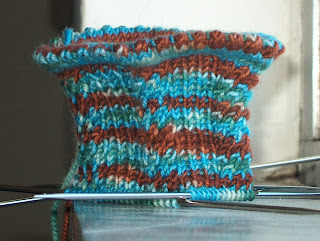 I was also crazy enough to cast on for Monkey1's Lorna's Laces Dublin Bays, but I'm hoping the third time's the charm. So far so good. Haven't gotten hung up on the simple lace panel and the size looks like it'll work. 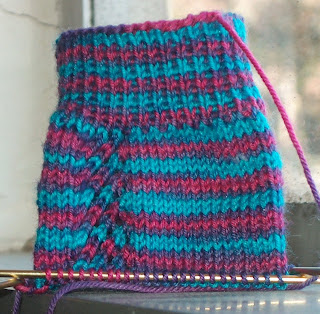 But today I did finally get my March Rockin' Sock club kit. And just in case you haven't been spoiled yet or haven't gotten the kit, don't scroll past the spoiler alert: 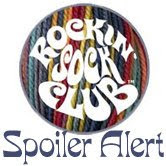 Directly opposite the color wheel of January Rockin' Sock Club color, the oh so spring, Irish, leprechaunish Lucky in Socks that Rock mediumweight with a pattern by JC Briar. 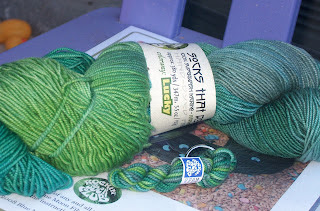 The perils of being sick is that I get uber dorky and silly, but check out how cute these sheepy shopping bags tapmouse found in SF! You'll have to ask which variety store in SF she found them in. It may have been in Japantown, but I don't think it's from Ichiban Kan, a totally favorite store of ours. These bags got the "cool" stamp of approval from my pre-pre-teen Monkey1. 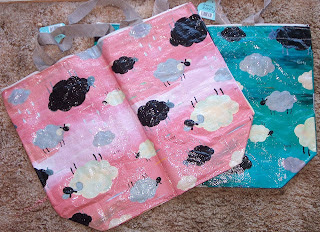 The turquoise one will rotate with my Hello Kitty one as one of my knitting bags. I'm hoping these sheepy bags will keep my lemming desire for the new Namaste Laguna bag (in turquoise or course) at bay. It's hard to do especially since I saw Carrie's. It's certainly much more economical than the non-knitting version in the April 2008 issue of Lucky (p.205 Hogan leather trim coated canvas tote). 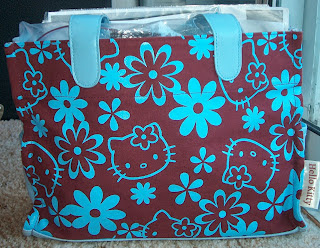 Oh yeah, I'm 2/3 of the way through my SotSii. That third skein isn't quite centered as it should be, but since I'm not fond of tinking/frogging my Malabrigo lace beyond one row, I only have myself to blame for the slight asymmetrical placement. 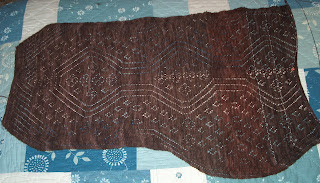 I'm going to take a brief break from this during the weekend since both Monkey2 and I are wallowing in viral misery at the moment. I'm not sure which WIP I'll be mentally apt for, so we'll see where I go next.
Posted by Unknown at 9:43 AM 5 comments:

One of those unfocused posts

At least I'm cranking on my SotSii. Hint 5 is done in the new much more orange skein I got. I'm halfway through hint 6 in the 2nd original skein. It's darker than the first, so I'm going with "let Malabrigo be Malabrigo" in the spirit of "let Noro be Noro." I should focus on finishing this since the final hint #9 was released. It's going so quickly now, but I'm not sure.

Monkey1's Lindy Hop back is finally done. Modified the shoulders with short rows for a 3-needle bind off with the front later one. I should cast on for the front, but I am tempted to do one sleeve so I can feel like this WIP is moving much faster than it is. But I need something really simple while watching Lost (when I'm not bawling my eyes out about my favorite isle couple Jin & Sun). 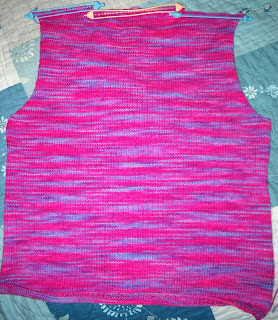 My latest Wollmeise came in which is good since I don't know when I'll be able to catch another update. Claudia's moved them to Fridays at different times. We can't access her shop from work (cough *not that I should* cough), so if I'm there when she updates, I'm out of the running. So, left to right: Guinea Pig 1 in med (I think - I need to double check), Miss May in med (the tan makes this combo interesting), and Vincent in dark (woohoo!). 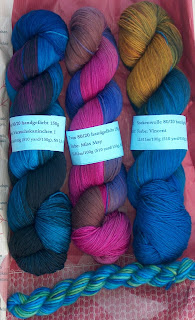 But first, I opened up my STR Braun's Woods that was being sold at Stitches West but ended up getting at Purlescence Yarns instead. 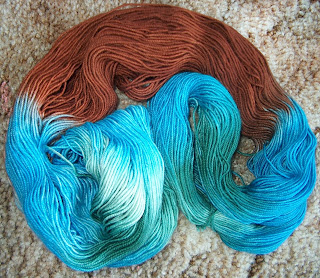 I cast on and worked on the Cedar Creeks pattern while Monkey1 was at the orthodontist. I know I should wait 'til after we get our Rockin' Sock kit for this month, but when Carrie & Nathania started talking about a Cedar Creeks KAL in the STR Ravelry group, I just couldn't resist. 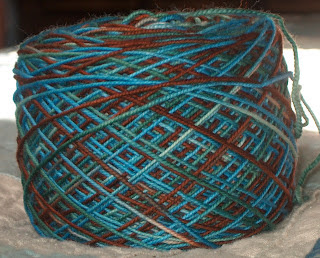 I finally finished the back of my Grace sweater. It's not like it's a difficult knit at all as everything's charted well. But the poor sweater's has been getting low priority since I cast on. 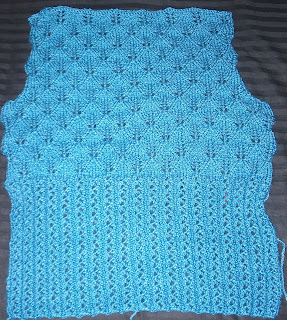 I had also hoped to finish Monkey1's Lindy Hop back as well, but I got sidetracked into trying to re-start her Lorna's Laces Uptown Dublin Bay sock. The first time around I totally screwed up the simple 4 row lace pattern. (Apparently I pay better attention when a pattern is charted up the kazoo.) So what did I do this time? Use measurements that are over 6 months old for her feet. Yup, these are tad too small. I had hope to salvage this thing by finishing them w/Monkey1's old measurements and save the pair for Monkey2, but Monkey1 wants her yarn. So now I need to decide whether to buy more Lorna's Laces Uptown (wonders if any are on sale now) or frog what I have and start over. I feel like such a maroon. 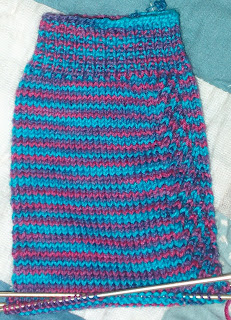 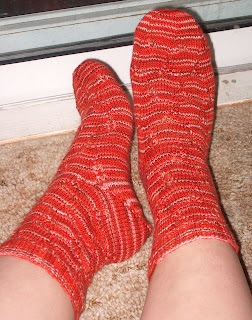 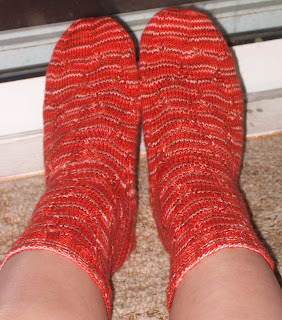 Fits great and the "ear" problem I had on the first sock doesn't seem quite as obvious on the second sock on my left leg. I will assume it'll wash/block out or will smooth out during wearing.

Love the pattern as does Monkey1 so I'll be doing this pattern again sometime later. (And I'm not saying this 'cause I found out at Stitches that Adrienne & I are practically neighbors! Really, I'm not. It's a great pattern.) At first I thought I'd have to buy another Dragon Dance for her, but she is open to using a different colorway from my stash. That is, if mommy here is willing to part w/any of her STR. Hah.

After posting a couple pleas on Ravelry for my Marron Oscuro Malabrigo lace, in the end I found another yarn store online that did have it in stock. For reals. And they were very quick in replying to my e-mail and mailing the skeins out. The skeins are a bit more orange than my original two, but it could've been worse. I saw a worsted weight skein in this colorway somewhere that was practically blush pink.

Because of the color difference, the plan of attack will be to knit hint #5 only with one of new skeins and then finish off hints 6-9 with the second original skein since I got all they way through hints 1-4 with the first skein. Hopefully balancing the colors this way will work. 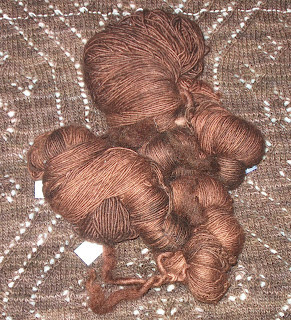 But before I got those skeins in the mail, I grabbed a skein of Crystal Palace Merino 5 in pink (yes, pink!) from Article Pract for Monkey2's BFF. Unfortunately, the toddler BR hat pattern I chose didn't go quickly enough, so I missed the birthday deadline and BFF has moved on to pre-school. So by default it'll be Monkey2's hat. 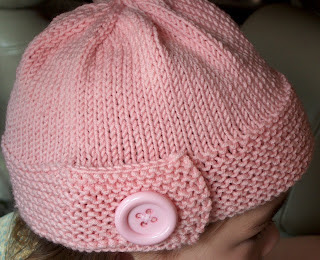 Of course, there was no way I was going to leave Article Pract with just one skein of Merino 5. I finally got my hands on the Noro Kureyon sock yarn. And it's no surprise, especially to tapmouse, that the colorway I picked has my favorite Noro cobalt blue. I think I will knit a pair of socks out of this skein, but I am fully prepared to deal with all its quirks detailed in many a review. After all, I managed to survive making a Silk Garden Clapotis as my first big knitting project without giving up on knitting altogether. 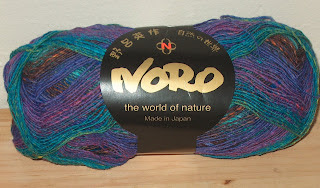 I somehow missed this yarn at the Bobbin's Nest booth at Stitches West, but my excuse is that their booth was a little small and it was during the crowded lunch/class break period at the Market. In the end, I got these 2 Hazel Knits colorways simply by checking her online shop. At least this way I got the Chocolatier (left) and Weekend Warrior (right) colorways that I wanted. 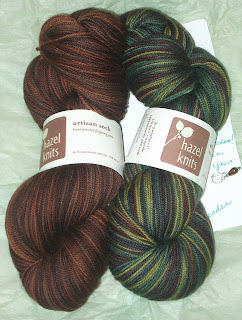 And speaking of chocolate, tapmouse & I discovered the yummy tasting Cosmic Chocolate location just a few doors down from Article Pract on our more recent visit. (You gotta see tapmouse's pics!) Between that and Bakesale Betty's fried chicken sandwich, it's going to be really dangerous to the wallet & waistline going there. Oh, but what a confluence of shopping delights!