I was killing time

'til I got my test knit assignment, aside from slowly working on birthday brother's cardigan. 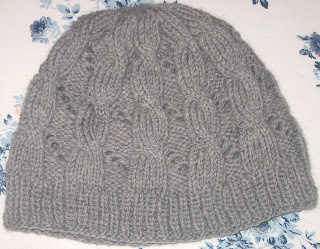 Larger needles meant larger row gauge and so only had to do 1 more pattern repeat for the adult size and I also kept the same cast on number. Also replaced the k2tog's in the crown decrease for ssk's like I did with Monkey2's version. I found this suggestion to keep decrease slant the same as the cable crossings cruising through the myriad of finished Hermione hats in Ravelry. I'll have to dig through this list again to figure out who I copied that idea from. 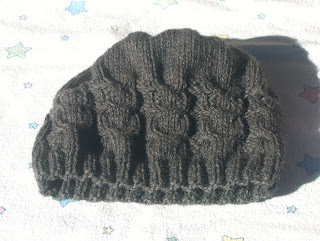 No mods. Still needs to have 1 or 2 pairs of button eyes sewn in.

I knit the hats with no one in mind to give them to and am wondering if I should keep them since I didn't choose a machine-washable yarn. If no one else, the Monkeys can always wear them. 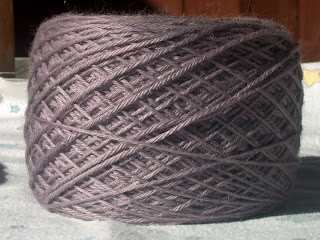 So for awhile, I'll have nothing exciting to show yet 'cept for the BMFA Peru (oops! Thought I had bought BFL. My bad.)in Bleck I'll be using for Samro's test knit. 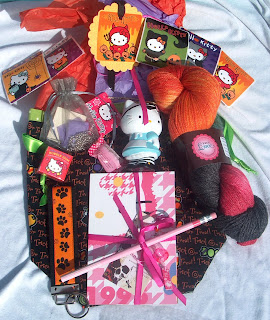 Oh, and one more thing. I almost forgot this was arriving. From Woolgirl, the Hello Kitty Halloween kit. Jen never fails to delight.
Posted by Unknown at 11:34 AM 5 comments:

When I'm not in a sock-knitting mood 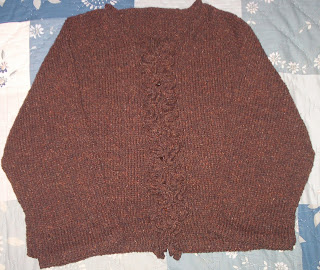 I finished my second attempt at my Marilyn's No-So-Shrunken Cardigan. 'Cept this time it is shrunken, but in a Regency/Jane-Austenish way. I hope. That's what I get for not re-swatching after re-starting this project after 3 years of frogging the first attempt, but it fits comfortably. 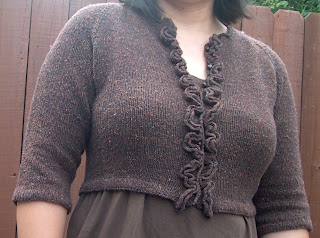 Mods:
Just the buttonband only - my row gauge is smaller than the pattern, so went with the typical rule of thumb of picking up 3 stitches for every 4 rows. I could've lengthened the cardigan since I had plenty of yarn, especially since it's supposedly discontinued by the US distributor. However, what drew me to the pattern was the fact that it was indeed a cropped cardigan, so I stuck with it. 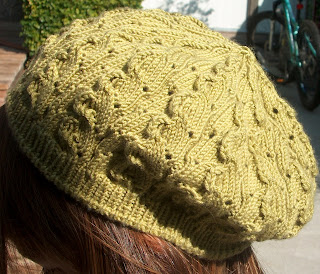 I should've started one of my sock KAL's next, but I was in a hat-knitting mood and cast on.

The medium's still slightly on the small side, but I haven't blocked it yet. I'll probably gift it, but tapmouse thinks I should keep it for myself. We'll see. I'm still in a hat-knitting mood, but got sidetracked by some fandom-ish stuff. 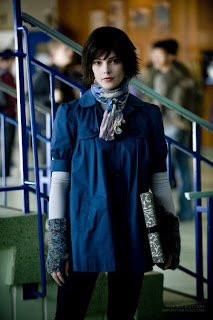 I saw some discussions on Ravelry regarding a pair of fingerless mitts worn by Alice in a New Moon (Twilight) movie still and I had to join in. My sister was amused at my geeky lemmingness, but she ended up with the pair anyway. I was going to make a scarf with my remaining yarn, but it looks like I'll have to knit myself my own mitts pair & then knit a cowl with the remainder. 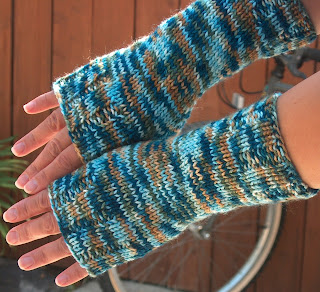 Mods:
- CO 35 sts
- Didn't switch to the smaller needles 'til halfway through the top ribbing. 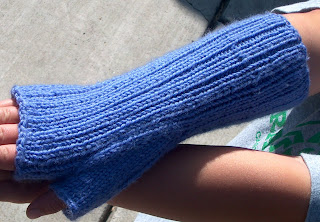 And not to be left out of the fingerless mitts bandwagon, Monkey1 requested a new purple-y pair. She even knit a row or two and these mitts were on dpns. I found it interesting that she was more concerned about getting the purls done correctly more than dealing with the multiple "sticks" on her mitts-in-progress. She only had a few errant yo's when she moved the yarn from the back to the front between the knit & purls and I still need to work that extra yarn around the other rows to even them out.

The pics with the pair modelled on my feet this morning were lame, so I'm going to be even lamer and post some pics I took earlier. 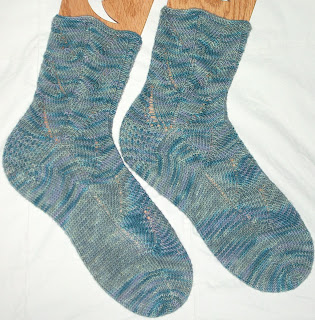 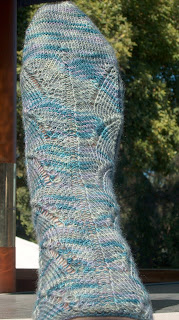 mods:
- Used the larger needles for the 1st 2 repeats of the pattern on the leg, the smaller for the rest of the socks.
- Foot decreased down to 64 sts instead of 66.
- Less decreases on toes for slightly less pointy look.
- Extra wrap on Dipper stitch 'cause I am a tight knitter. 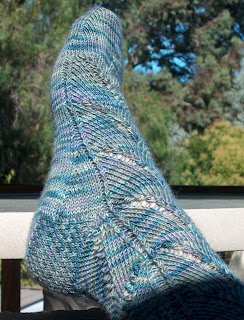 I should be starting my Sept RSC socks or the Socks that Rawk KAL socks next, but first I've been plugging away at the endless ribbing of my "birthday brother's" Morris cardigan 'cause I decided to do the back & sleeves first. The front requires a little more planning as he wants pockets and a zippered rather than buttoned front. But I have either 'til our birthday next month or when he supposedly retires by the end of the calendar year to finish. 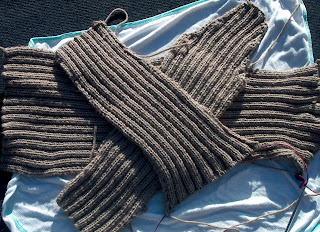 But the main reason I've been slow on his cardie is that I've been jamming on my own Marilyn's Not-So-Shrunken-Cardigan (Ravelry link since I can't find it on Wendy's blog - soon to be re-released?):

I'm actually further along than this old pic as all I need to do is to buy buttons, knit up the buttonhole band, and crochet the ruffles. Everything else including the sleeves are knit up & hemmed. I really should go button shopping, but I've been jonesing to start on a few hats, especially with the few days of cool weather we've had here and there. So we'll see.
Posted by Unknown at 8:59 AM 4 comments: