No, not the color exactly. It's a Monkey2 saying that encompasses oopsies, darn it's, and doh's.

I was feeling content that hint #1 of my Secret of the Stole-iii (SotSiii) seemed to go at a decent pace despite the slowness of having to place the bead on with a teeny-teeny-tiny crochet hook. Then I glanced at my chart when I was about halfway done and saw that I somehow completely missed the very first bead placement. Since it was at least 20 rows later, I decided not to frog or tink down to the errant spot. After all, that pattern row only contains one bead placement only. Hopefully I'll find an online tutorial or hints to help me sew that bead in later without messing with the stitch pattern. If not, I'll have to remember not to do that single bead at the other end of the stole, assuming it'll be symmetrical. 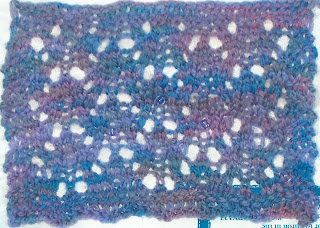 I'll need to take a better pic of my Mystery Stole 4 (MS4) swatch later as I waited too long and the good light was gone. I'm not sure about using the Dream in Color Pansy Go Lightly as it looks more variegated than semi-solid. At least it looks better blocked than unblocked. It was a downright mess before. Besides, while my swatch width is a little wider, the length is quite short.

I do love the iridescent purple 6/0 round seed beads though. Got these at the same local bead shop I got the green 8/0 beads for SotSiii. Since I really love these beads, I'll either need to find a different lace pattern for the Dream in Color & beads or get another purple lace yarn to go with the beads for MS4. 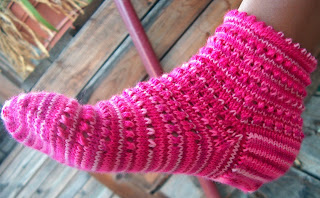 In the oh-so-stinkin' cute category: 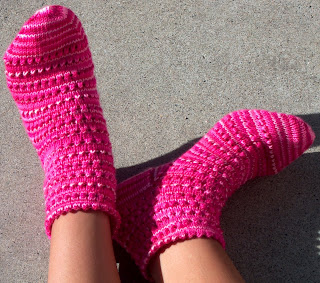 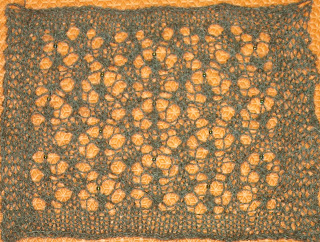 I'm not fond of knitting with this yarn. I can feel the residual oil or something in the yarn, but the swatch does look better when I wet blocked it. It opened it up and the yarn didn't get super fuzzy which my initial concern with using this stash yarn. 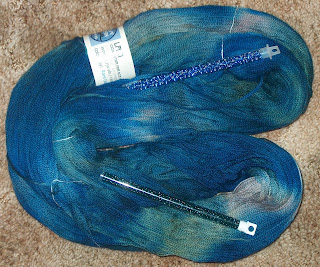 Because the Alpaca Cloud was the only solid colored lace yarn in my stash, I am at a conundrum with what to use for the Mystery Stole 4 KAL. As much as I love this Rare Gem Laci that I bought at sock camp, I think the lighter bits would make the yarn too variegated. In any case, I would go with the darker green beads (my pick) for a more subdued look rather than the brighter but pretty blue (Monkey1's pick) for whatever beaded stole or shawl I would end up doing. 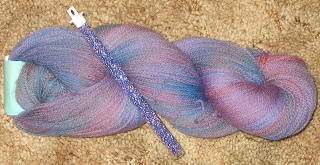 I am leaning towards the Dream in Color Baby in Pansy Go Lightly since Dream in Color's yarns tend to knit up as semi-solid rather than variegated. I had one skein in my stash from Woolgirl, but unfortunately at the time, Woolgirl was out of this particular colorway. I did find a second skein that closely matched the color fo the first at Purlescence, so I will probably swatch this yarn & corresponding beads first.
Posted by Unknown at 5:18 PM 5 comments:

Knitting & weaving in ends complete 10 am-ish PST. Tried to finish the bind off last night, but after Michael Phelps 1/100 sec win in the 100m fly, I just couldn't. Not to mention it was way past my West Coast delayed broadcast bedtime. 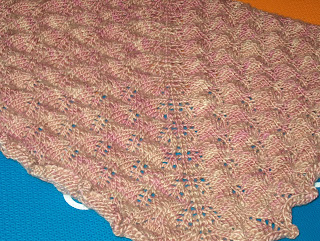 Uh, I need another set of the kiddie foamie blocks: 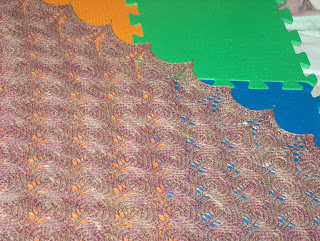 Off to knit my SotS-iii swatch, but first I'll probably cast on for some Sweet Tart socks for Monkey1 to transition from a worsted weight yarn project to the laceweight one.
Posted by Unknown at 11:14 AM 6 comments:

Can you hear it?

It's the sound of frogs and tinks in this corner of the Ravelympics village. 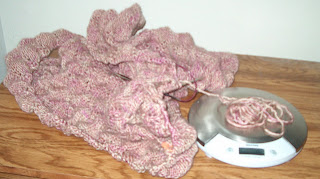 It seems I am so beside myself as I can't even take a decent picture. But I can sorta see that the last yards of my yarn aren't even registering on the scale. Apparently, I have no idea how to use the nifty shawl progress calculator (see the sidebar) 'cause I am out of yarn on row 13 out of 14 for the border pattern.

Off to rip the 12 rows of my border and the last extra repeat.

Arrrrrghhhhhhhh!
Posted by Unknown at 6:35 AM 7 comments:

The pharoah is demanding but is worth her weight in rockin' socks! 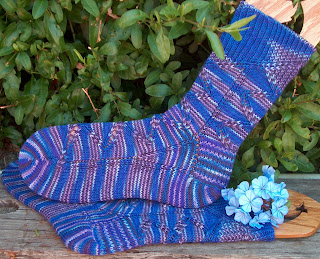 modification:
Per Yarnissima's original design, knit the leg charts 'til leg measured no more than ~3 in. This meant I ran short by just a little bit! I was on the last row of the twisted rib cuff and had to use my emergency keychain skein that comes with our sock club kit to finish the last row & do the bind off. I had bought another skein just in case, but decided I wouldn't wind it up for just that little bit of length.

These socks were well worth the challenge of a certain twisted stitch I wasn't fond of and the focus that was the transition from leg to cuff. I continue to love Yarnissima's designs. I just need to knit the rest that I have in my stash. 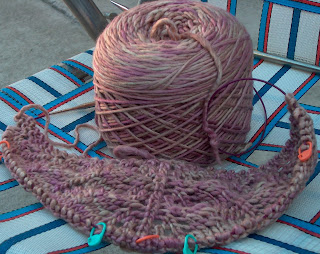 And I did cast on for my Shetland Triangle yesterday for Ravelympics 2008 bright and early in the morning. I worked on both the shawl and the rest of the second sock during the delayed West Coast broadcast of the opening ceremony. Say what you will about the role of politics in the Olympics and all, but under the direction of Zhang Yimou, the opening ceremony was utterly spectacular.
Posted by Unknown at 5:55 PM 5 comments: 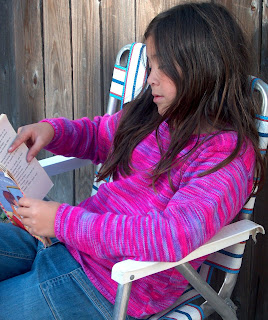 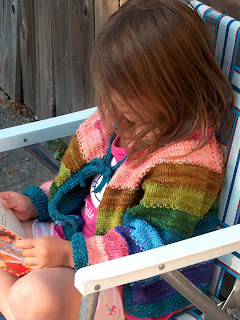 Deets in previous post.
Posted by Unknown at 6:15 PM 11 comments:

The "would you rather" game

"Would I rather do endless applied i-cord?" 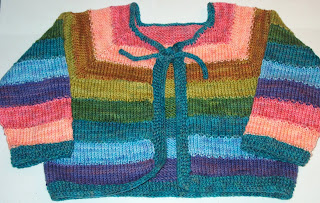 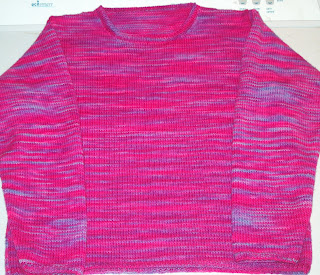 The applied i-cord won out & the Tulip was finished first on Sunday.

I promise modelled shots in the daylight later. I just need to Mr Sun to wake up and for the Monkeys to be in a less recalcitrant mood as it's unusual for them to not want to ham it up for the digi cam. For now, the deets:

First up:
Tulip "Baby" Sweater
Dream in Color Classy - various gorgeous colors (Cool Fire, Giant Peach, Strange Harvest, Spring Trickle, Happy Forest, Blue Lagoon - also the trim color, Some Summer Sky, and Visual Purple)
pattern size 6
needle size - KnitPicks US 9 circs
mod: Sleeves are 1" shorter than pattern to fit Monkey2's current arm length
comments:
1) When the designer up-sized the pattern, she/they kept the proportionally "oversized" width. It doesn't seem too wide for Monkey2, but Monkey1 can conceivably wear it as a 3/4 sleeve bolero. Believe me, she's negotiating heavily on this idea.
2) I didn't need the emergency yardage Nathania kinding spotted me from the shop. I had gotten paranoid I wouldn't have enough after reading Ravelry comments of various knitters running out of the border color given in their kits, but I didn't have to worry after all.

And finally!
Lindy Hop from the Colinette Jitterbug book
Colinette Jitterbug in Alizarine (aka Safety Pink as it's known at Purlescence Yarns where I bought both patterns & yarns/kits)
3rd pattern size
approximately 3 1/2 skeins (the remaining half skein + 1 extra may be knee highs for Monkey2. Maybe.)
needle size - KnitPicks US3 circs
mods:
1) Short row, 3-needle shoulder bind off which meant that the collar was knit in the round as opposed to the pattern's direction to only seam one shoulder, knit the collar back & forth, then seam it with the other shoulder.
2) Monkey1 didn't want the funnel neck, so it's just a plain 1x1 rib crew neck. Actually she wanted a boat neck finish, but I refused to undo the 3-needle shoulder bind off and re-knit the top portion of the front & back, especially when I re-knit part of the back due to my inability to remember which decrease is right and which is left leaning.

So now that I'm done with all the sweaters I've had on my needles, I'm ready to cast on for my Mochaberry Luscious Single Silk (LSS) Shetland Triangle for Ravelympics on Friday. That's some seriously sized yarn cake my LSS wound into: 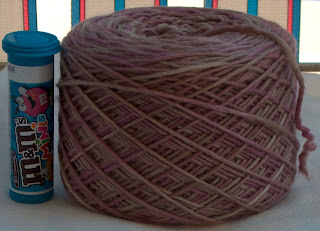 Due to a rather expensive idle control valve replacement project for the car, I am not buying new yarn for the KAL, but rather using stash yarn. I bought Knit Picks Alpaca Cloud in Moss when it went on clearance a few months ago. It's a bit dark to be considered pastel, but it's still muted. The BMFA Laci Rare Gems I got at Sock Camp are too dark for SotSiii, but should be fine for the Mystery Stole KAL 4. One's a Ravenish colorway and the other, while totally me, is quite the bright blue (uh, yeah, pics later). I have a skein of Dream in Color Baby in Pansy Go Lightly that would be better colorwise, but I've learned my lesson about starting a lace KAL with not enough of one dyelot to start with. 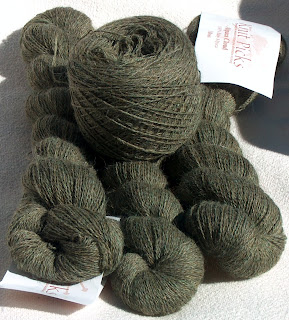 I probably won't cast on for SotSiii 'til after Ravelympics, but I will probably begin the swatch so I can check out some beads which I'm debating on adding in even though it's recommended for the pattern. Who knows when I'll cast on for MS4, but I'll really need beads for that one.

'Til Friday, I'll be working on my second Cleo, but there's absolutely no guarantee I'll be done by then.
Posted by Unknown at 8:47 PM 6 comments: