When one of the Cookie A Ravelry fan groups began the year-long KAL for all her socks in Sock Innovation, I told myself that I would knit my own pair of Lindsays, the pair I sample knit. Unfortunately, I'm a month behind and only one sock to show for it. 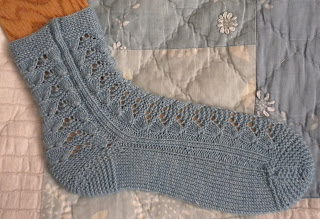 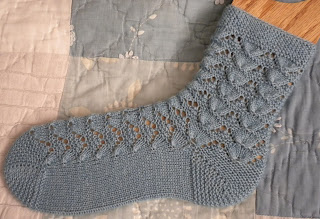 Mods:
Knitting per Cookie's original instructions since I don't believe Interweave had published the errata for their omissions to the editing. What's missing? These instructions:

Begin working from Pattern chart, beginning with row 2, as follows: K2, p2, work in Pattern to last 2 stitches of round, p2.

So, why haven't I finished 1) my Basic Chic Hoodie (I am on the hood part at least) and 2) the left Lindsay sock? The test knitter in me came out and volunteered to test knit Sam's Vancouver stole. 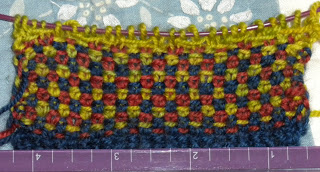 Unfortunately, the Dream in Color (DIC) Smooshy I chose was too thin to meet gauge. I tried finding the same combination of colors in DIC Classy locally, but all the lys that I was willing to drive to that stocked DIC didn't have the same colorways I needed (Romeo Blue, Spring Tickle, and Cinnamon Girl).

So instead I was drawn to the madelinetosh Tosh DK (formerly worsted) yarn that is a staff pick for June at Article Pract: 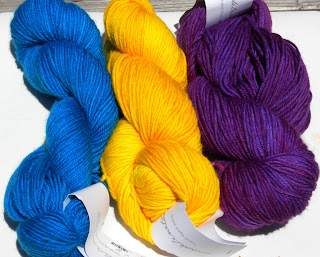 Left to Right: Nikko Blue, Chamomile, Magenta (which is/was a bear to photograph as it kept tending to photograph blue-purple instead) 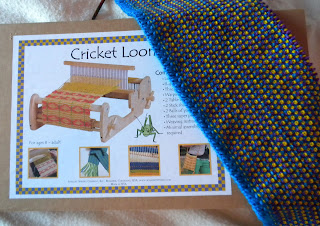 This new combo gives me more of a tropical feel than my original more sedate combo, but rather than Hawaiian scenery, it reminds me more of the explosion of colored silks in the local streets markets in Indonesia (Bali, especially). I do like it as well. And to keep me motivated to finish by the end of the month deadline, I finally used my x-mas gc DH got me from Purlescence Yarns to buy the Cricket Loom I've been wanting for awhile. Once I'm done with the test knit, I'm definitely assembling my loom. Oh, and finishing my other WIPs.
Posted by Unknown at 6:18 PM 2 comments: