I haven't done a WIP post in a long time, but it seems my WIP's have been slow going recently. 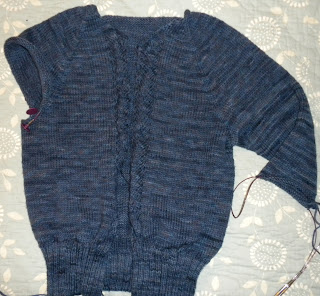 I mis-informed myself into thinking that this top-down, mostly St st cardigan would go quickly. After all, the last 2 Chic Knits sweaters I've knit were done roughly in a month and their construction would imply longer durations of work. I started this before I even started my second February Sweater and I'm still working on this. I suppose if I gave this as much focused attention as my previous sweaters I'd be done by now. 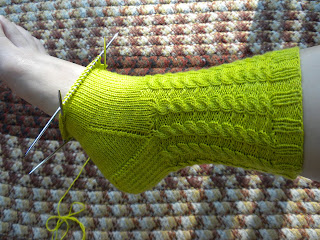 One of my distractions had been a pair of bright socks for a friend of mine. I wanted to match the cable pattern on the Fine Cabled mitts I had already made her. However, in another mis-calculation, I didn't check if the entire leg would go over my heel easily before I knit all the way through the foot. While I would be fine w/the slight tugging it would need to go over my heel, I am concerned that my non-knitting friend will find it too snug to even put on.

In conferring with tapmouse, I first decided that I would not rip back to either cast on w/more stitches or re-design w/less cables & more ribbing. Instead I had though I would finish this pair for myself and knit another pair from some similarly bright green yarn in either a plain vanilla pattern or a re-design. However, it would ruin the matchy-matchy theme I want w/the mitts. So, I am now leaning towards ripping the whole thing and start over, but this time have one swatch be w/more stitches and the other w/more ribbing or St st and less cables. For now this is on hold.

eta: In perfect timing, I found that Article Pract had the Koigu on sale and they had the chartreuse in stock! So this partial sock has gotten a reprieve from the frog pond. I'll finish this pair for myself & knit a new much less snug pair for my friend.

In the meantime, I also whipped up: 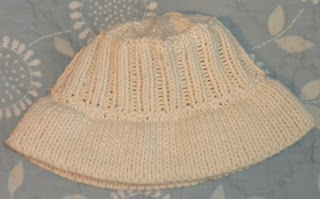 This was originally intended for one of my team members in a class I was taking at work who had a baby girl, but I waited too long to start. I was going to finish the night before the last day of class, but that was the Lost episode that I got mad at and all planned knitting during or after that episode didn't happen. I'm no longer po'd at the Lost writers (who I'm sure knew they were going to get a bunch of reactions similar to mine), but until the series finale, no knitting is going to happen on Tuesday nights between 9 and 10 pm.

On the plus side, I've started a stash of baby knits for Monkey2's teacher who is due at the end of the summer.
Posted by Unknown at 7:59 PM 3 comments: