As I was trying on the first sock on my sleepy Monkey2's feet one morning, she mumbled, "Ooh, those feel nice.  Is this my foot cozy?"  And so they are. 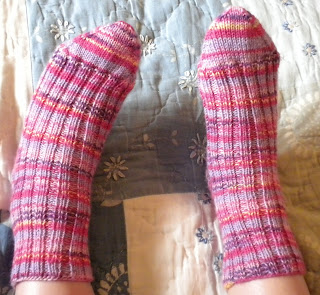 yarn: Regia 4-ply Flusi Das Socken Monster in Fraulein
needles: US 1.5 (2.50 mm) KP Harmony dpns
CO 56 sts
Simple 2x2 ribbing throughout the leg & instep
Worked until hit the bottom of her big toe & did a typical wedge toe bind off.  It's a little pointier than I should've made for her feet but it does give a teeny bit of growing room. 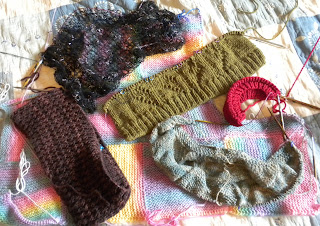 And with that done, I'm back to my usual pile of WIP's.  Well, technically the black one w/silver sparkles retangular wrap in the top left corner is Monkey1's.  While it should be easy on size 17 needles in garter stitch, she sometimes can't see the loops well enough & so she has me correct her errors.  I did try to power through her WIP in case she could wear it to the one "formal" dinner on the cruise ship, but once we found out it would be the second night of the cruise, I abandoned it for her ruffle scarf instead.  I'll have to have her get back to it or it'll end up permanently in my pile.
Continuing clockwise from Monkey1's WIP, is the olive Berroco Cuzco Cosima.  This may be a very long term knit since many Ravelers seem to have to make a lot of adjustments for a decent fit.  The little red blob is the beginning of a gift hat so it should go quick, the blue/beige shawlette WIP is Stephen West's Blue Whale from A Verb for Keeping Warm's Pro-Verbial yarn club, and the brown infinity scarf is a Twisted Rib Neckwarmer in The Plucky Knitter MCN Aran.  Underneath it all is the mostly brainless Crystal Palace Mochi Plus Parquet Squares blankie for Monkey1.  I don't have enough to finish, so I need to order more of the colorway.
But with all that, I don't have a sock on the needles, especially with Monkey2's foot cozies being done.  I should wind my Jan 2011 Blue Moon RSC kit & cast on, but our March 2011 RSC kit is travelling towards us & should arrive soon.  Then there's 2 of the 3 kits from last year I should knit.  (Not knitting up Sweet Pea 'cause I'm saving that for the next female baby in my extended family...that lives somewhere colder than Oahu and the Philippines, that is.)  And still in the Blue Moon theme, the Socks that Rawk group has a KAL voting poll going on and I have all 5 of the paid patterns in my "library" of patterns.  But that's won't start 'til the beginning of April once the voting is done.
Then there's Irishgirlieknit's Walk Now.  I even have a skein of Plucky Knitter Primo in a neutral color that would go well with it.  I guess I'll knit on my WIP's while I contemplate which yarn & sock pattern to do next.
Posted by Unknown at 7:39 PM 3 comments:

﻿February turned into an insanely busy month with Stitches West and a family cruise vacation, not to mention a couple secret test knitting projects I volunteered for.  Right now I can only share one of them since Stitches West has passed.
﻿ 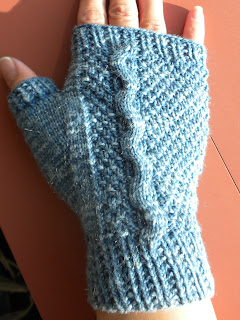 First off, a pair (I swear, but I didn't get tapmouse to take a pic of them on me) of mitts for Pico Accuardi's booth at Stitches West.  Deb Accuardi and Stevanie Pico (with the help of Terri) are a delightful team and I hope more knitters will discover their hand-dyed yarn, much of it with natural dyes.

No mods since it's a sample.  I've got a beautiful turquoise skein of Stevie Sparkles, so I'm hoping to make my own pair later. 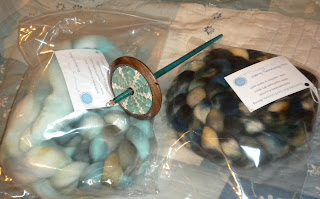 I've realized I'm not a snap-happy Stitches West attendee despite the XRX lifting the photo-taking ban this year.  All I've got to show for it is one pic of my new KCLWoods shell-inlaid spindle (Ken & his wife are so kind & adorable!) and a couple pretty Sunshine Yarns fibers from her booth.  It is possible to find a pic of me with a few other Sunshine Yarnies in her booth in the relevant Ravelry group thread.  But I'm going to be lazy and not post the link.

And while I've been good this year at not buying too much yarn (only 4 skeins at the BMFA booth!), I did kinda make up for it with the buying of project bags and other accessories (cough*Namaste*cough).  The project bags are technically for Monkey1 who like any good young knitter, recognizes when she's at her limit skill-wise. 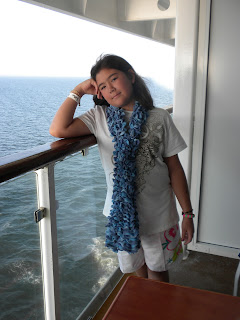 Monkey1 fell in love with a sample of an On Line Solo 194 ribbon-ruffle scarf at Fashion Knit in Walnut Creek and thought she could handle it once I showed her how.  Turns out that she decided (and rightly so) that knitting with ribbon yarn is actually too fiddly.  So, being a sucker of a knitting mom, I took it over.  I agree that it is a fiddly knit, but I managed to finish it on a one-week cruise to the Mexican Riviera.  My knitting time was helped greatly when we ended up with an extra day at sea due to an emergency detour to Ensanada to drop of an ill passenger, causing us to miss one of the 2 days planned for Cabo San Lucas.  As the captain said, sometimes that's the way it goes.  DH did not like the changes to Cabo since he last went 20 years ago, so I don't think he minded as much.  He loved the old fishing village charm of it which has been replaced with very American touristy stuff combined with the agressive hawking by the vendors. 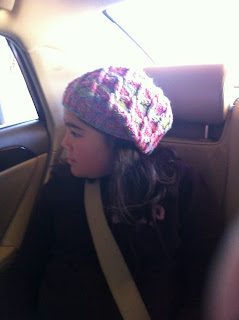 Sometime in the past month, I also managed to knit Monkey1 a new slouchy hat so I could get my Wesley beret back.  It's such a cute pattern that I'll probably knit another one in the designer's bulky weight version (inspired by a Taylor Swift beret). 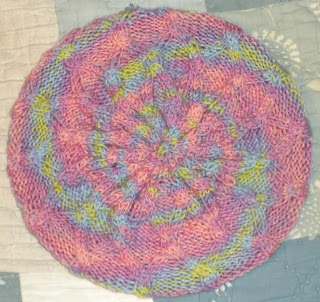 Just one modification in which I used Ysolda's 2x2 tubular cast on.  Love this cast on. 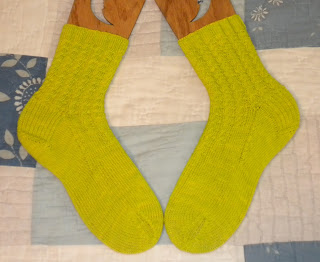 ﻿
Once I finished Monkey1's ruffle scarf towards the tail end of the cruise, I finally cast on for my second acid green Koigu sock in which I used the C2B cable pattern from Ann Hanson's Fine Cabled Mitts pattern.  I'm so happy this is pair is finally done.  It's been six months since I knit the first one and probably longer than that when I knit the original first sock that was too small.
Posted by Unknown at 5:07 PM 2 comments: