I'm not the biggest fan of knitting with beads, especially when it comes to a beaded sock pattern. So I finally decided to convert the socks into gloves instead. 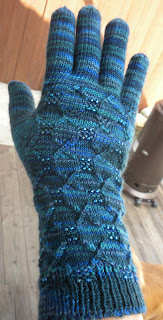 Rockin' Sock Club Jan 2009 kit
Pattern: Queen of Beads socks by Sivia Harding
Yarn: Socks that Rock lightweight in My Blue Heaven
Beads: not the 8/0 beads specified in the pattern. The RSC kit actually came with beads that were a size smaller. They need to be threaded on to the yarn before you start knitting, so it was a PITA to get them on the yarn.
needles: size US 1 (2.25 mm) circs for the body, dpns for the fingers & thumb
pattern size: The medium sock size was close enough to the stitch count for a large glove size, so it worked out well for me 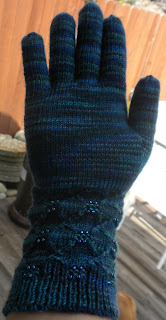 I still need to weave in all the ends & close any gaps when I re-attached the yarn for the fingers & thumb.  It may take me a little while to do the left glove since it takes forever to thread the beads on.
Posted by Unknown at 12:52 PM 4 comments:

While the Monkeys and I have been out sick for a few days, we were on a monster-knitting kick.  I knit one up for Monkey2 and Monkey1 & I shared knitting duties on hers. 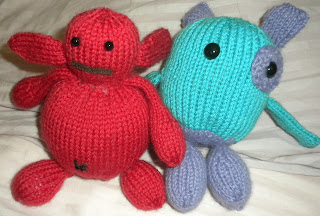 Gabby the Garden Monster and Irving the Icebox Monster from Rebecca Danger's Big Book of Knitted Monsters are the first 2 we've completed and we've got at least 2 more in the queue. 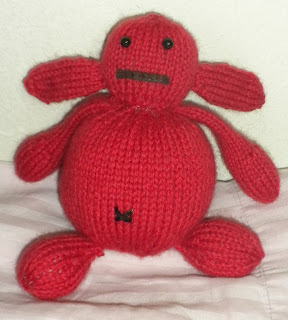 For Gabby:
yarn: Stitch Nation Washable Ewe in Strawberry
needles: size 6 circulars
mods:
- Monkey2 didn't want a white mouth, so we settled on brown which was the only other felt color I had in my stash aside from red.
- size 6 mm safety eyes since Joann's were out of size 9 mm's.  They're not in there well, so I may have to replace them with embroidered eyes soon. 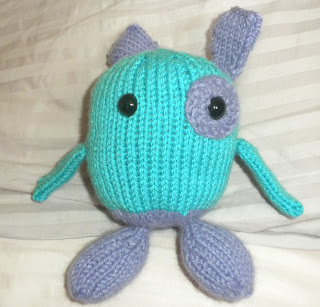 Monkey1 knit the body & sewed all the pieces together. The cockeyed ear was by her design. I knit up all the appendages.  Her other mods were to leave off the belly button and the mouth.Our one unintentional mod was to forget to stuff to the arms, but since Monkey1 was fine with it, we're leaving them as is. 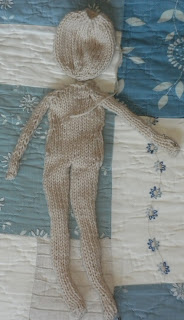 Also done with the knitting and assembly is a second Benji & Friends doll. It's only been a year since I knit the first. :p I just need to felt it when we're up at the cabin with the old school (non-high efficiency) washer or by "hand" in basin.  However, that'll have to wait until my lungs are functioning better.  This cold's not quite at flu level, but it's a miserable one. 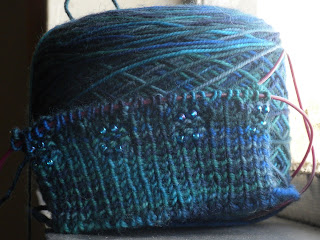 In the meantime I've finally cast on for my RSC Jan 2009 kit, the Queen of Beads.  I had temporarily lost the beads and lovely Sockateer Tammy send me a little replacement bag.  Of course, some corollary to Murphy's Law kicked in and I found my original packet of beads after I received Tammy's replacement.

Once I finish the "leg" portion of the sock, I'll decide if I'm going to convert them into fingerless mitts or gloves or finish it as a sock.  I guess we'll see.
Posted by Unknown at 4:05 PM 1 comment: