When we saw these cool-looking funnel-type clouds caused by the trough passing through that day, all us soccer moms busted out our cell phones and digi cams and took pics. I was tempted to take a pic of the other soccer moms in mid-photo taking, but due to the time of day everyone would've came out as shadowed silhouettes.

And I'm so proud that I have my first knitting student that isn't my kid! I'm not sure I can call Squid's brother my own student since he already knew how to finger knit and his grandmother knits. But still, I was so excited when he started asking me about how I knit with needles when he would watch me knit at practice. I had brought my own needles (he said he already had yarn), but he had his mom (soccer coach) buy him a set of Addi circs and a how to book (which he didn't bring with him) at the lys. 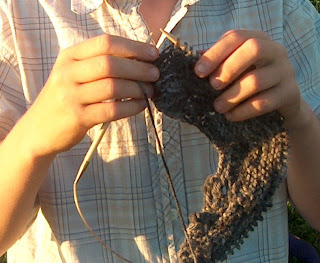 I am torn however between letting those "added" (yo'd) stitches stay on his fledgling scarf or fix them for him. Next soccer practice, we'll be discussing that.

As a break from the stole knitting (I hit a mental wall this week with them), I had decided I would knit him a hat since our first attempt at starting him with a hat instead of a scarf was an abysmal failure. With no book at hand and no idea what yarn he was using (no ball band) 'cept it felt like an aran or light worsted yarn, I was winging the stitch count and everything.

However, Monkey1 has declared the pattern I chose as "too girly!" Who knew that a simple cable pattern would be deemed "too girly" by the elementary school set? So I may designate this hat as Squid's and make her brother a simple ribbed hat instead. The only problem is if Squid gets a hat, I wonder if I need to knit 9 more hats for the rest of team. (I'm not even going to consider the siblings, but thankfully most of them only have one.) 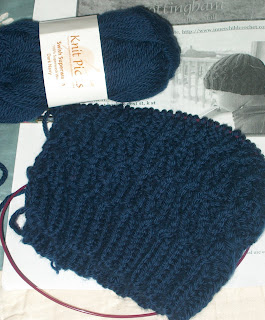 And I did manage to finish Monkey1's second fingerless glove. Now that I've learned how those fingers get knitted on (though it is pretty logical), I can modify whatever pair of free fingerless mitt pattern I decide to knit next. 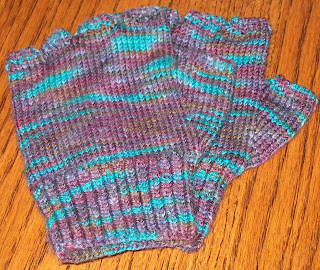 I am back to my SotSiii knitting and I finished hint #6. I am setting myself up for a doozy of a wedding weekend though. The last hint (#9) comes out that Friday when we have to take the girls to rehearsal and I'll have to finish knitting and blocking it by Sunday noonish so we can get to the wedding on time.

It may all be moot though if my dress shopping adventures today are any indication. I didn't realize how difficult it would be for me to find a dress I like that:
1) isn't black (I am my mother's child on this wrt weddings),
2) is a shade of non-black that will go with the stole (or my back-up SotSii),
3) doesn't make me look like I'm part of the bridal party ,
4) or conversely, doesn't make me look like I just got off of work.

Then again, rule #4 may get thrown out the window since DH expressed the opinion that perhaps I should not buy a dress I will only wear one time, maybe 2...that is, assuming it'll be the right shade of green or a shade complimentary to either SotS's or my Shetland Triangle (but that pink's more of a "spring" pink and thus presents a challenge wrt to the seasonal colors in the stores now).

It's going to be all about the stoles...

'cause my Gumdrop socks are done. And just in time for the September Rockin' Sock Club shipment since our packages are suppose to mail out Tuesday domestically. 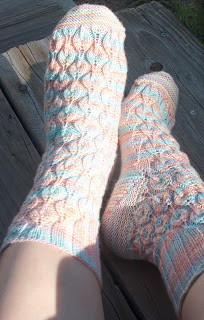 So all that I have on my needles now are Monkey1's second fingerless gloves, but that's for soccer practice, and my 2 stole KAL's.

I got hint #2 of my Mystery Stole 4 KAL completed yesterday. Looking forward to starting hint #3 'cause there I won't have to deal with beads for awhile on this stole 'til hint #5. 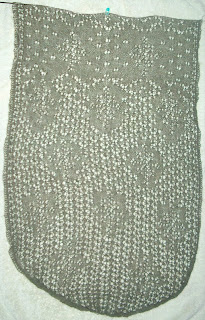 The stole I am aiming to finish on time however, is my Secret of the Stole iii. I finished hint #5 earlier this week, marking the halfway point of this KAL. We have a wedding to attend mid-October so this will be the stole I'll be using. The monkeys' flower girl dresses are primarily dusky pink and cream, but the embroidered flowers have rather sagey green leaves that I can match with my stole.

Now I just need to shop for my own dress for the wedding :P and the monkeys' dress shoes.
Posted by Unknown at 5:11 PM 7 comments:

As much as I groaned and whined when I read SotSiii would involve beads, I'm at the point that I'm actually enjoying knitting the pattern. I'm even managing to keep up somewhat as I finished hint 4 yesterday. But whether or not I'll finish hint 5 in time to actually enter one of the completion contests is another thing entirely. 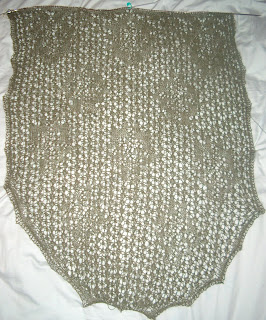 And I just got some Saturday mail goodness before we headed off to soccer. So nice to actually catch the postal worker on his delivery. Otherwise I would've had to hightail it to our tiny post office on Monday before they closed and I am so not fond of their parking lot. 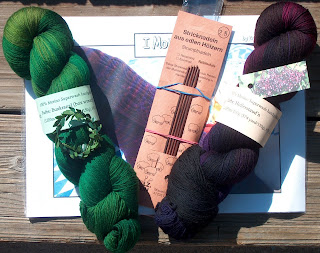 Two of my favorite colors! And deep dark purple is so very in this fall season. It seems appropriate that the first pattern is designed by Bockstark, who along with Elemm introduced me to Wollmeise on flickr.
Posted by Unknown at 3:55 PM 4 comments:

In the land of beaded lace

I believe tapmouse already mentioned the word "insanity." Clearly I am. As is the first beaded row where we have to place a bead on every other stitch. That's ~58 beads on one row! Then we have to repeat it for the other half of this stole.

I'm glad I stuck to my Dream in Color stash yarn though. The Pansy Golightly isn't as variegated-looking with more stitches on the needles. And the irridescent purple beads I picked give a nice subtle shine which is perfect for me since I'm not much on the bling...unless it involves some wicked gorgeous eyeshadow. 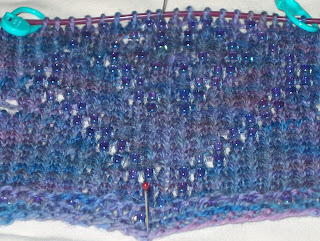 And that lovely little 4.0 Friday night made me so nervous that I stayed up late enough to finish hint #3 of my SotSiii. On the plus side, it means that I can knit hint 4 at a nice leisurely pace and finish that by this upcoming Friday night. 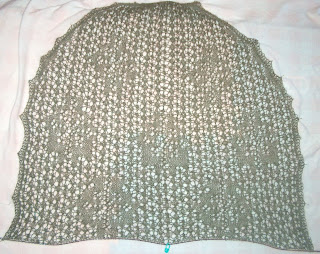 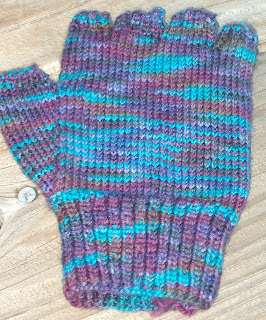 yarn: Shelridge Farm Soft Touch Ultra handpainted from Stitches West 2008, I think. I have another pair of skeins that are a lighter version that I got the year before. But it may be vice versa.
pattern: from Ann Budd Knitting Book of Patterns - child large/woman's small glove
needle size: 2.75 mm KP dpns

The yarn is lovely to knit up. Not fond of all the ends I'll have to weave in, so I'll leave that chore to do while hanging out at Monkey1's soccer practice. Monkey1 has an inflated sense of my knitting speed 'cause when I showed her the first one, she said "Where's the other?" Nothing like having my own Task Manager. 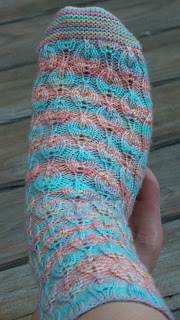 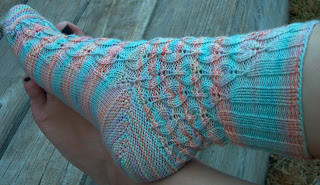 It took me all holiday weekend plus the extra day we took on Friday (Monkey2's pre-school was closed) to finish hint 2 of my SotSiii. Yeah, yeah, it would've been faster if I didn't knit the glove & sock, but they were more fun. Still, it doesn't bode well for my speed for the rest of the hints, especially since I can't work on this during soccer practice. Beads, laceweight yarn, folding chairs, and errant soccer balls are a recipe for disaster!

But I am consoling myself with how stinkin' cute this Wool Girl Sanrio and Friends sock club kit I got today! 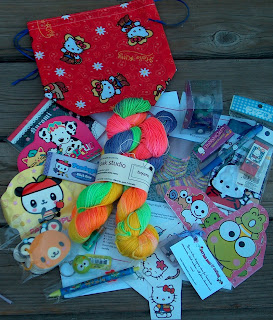 The monkeys have dibs on the Hello Knitty stickers, but the rest are are all mine! Well, the non-Pochaco & Keroppi bits are negotiable. The yarn will definitely be knit up into socks for Monkey1. Then I'll have to see if I have enough left over to knit up something for Monkey2 or e-mail Wool Girl Jen if she has something similar or leftover.

PS. That particular sock club lottery with the 50/50 odds of getting in that happened a couple weeks ago? Yes, I'm in the 50%.
Posted by Unknown at 6:43 PM 6 comments: