Like a lot of the knitting/crafting world, I'm completely lagging behind on my blog posts.With Instagram & other quickie online social media sources, they're so much easier to update than it is composing one of these blog posts.  In any case, a few things I've finished in the past few months. 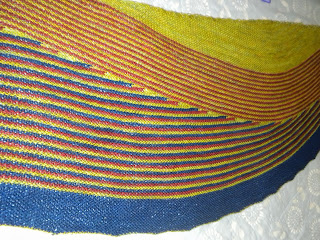 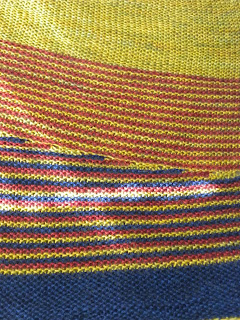 mods:
Ran out of Romeo Blue right at the bind off, so I had to switch to Spring Tickle.  When I had bought the yarn at a lys years ago for another test project (wasn't right for it - not lofty enough & too thin), I had an inkling the Romeo Blue skein wasn't quite as full as the other Smooshy skeins.  I don't know why I didn't weigh it & brought it to the lys' attention, but I don't remember if I had a kitchen scale at the time.

Like most other Color Affection knitters, subbed a kfb for the M1 & added a yarn over near the edge stitch on the RS row & dropped it on the WS row for stretch. And like everyone else, I've have tons of sock yarn in my stash, so I'll probably make another one in a different color scheme, probably with some STR. 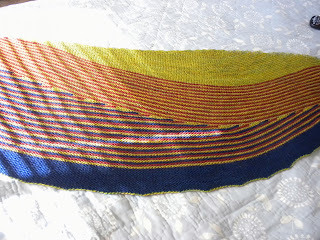 Per DH's request for our family cabin, I knit up a bunch of place mats. 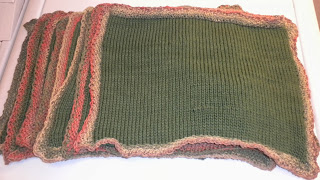 Pattern: My own though I used this tutorial to miter the seed-stitch border.
needles: size 8 (border for the thinner yarn) and size 10 for the body 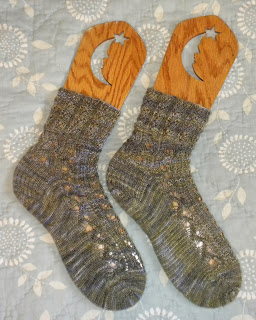 Lastly for now, an Anne Hanson (Knitspot) pattern I got from a Yarn4Socks (now a defunct online yarn store) sock club kit. I've been meaning to knit up this pattern ever since I got it, but since I hadn't knit any socks in awhile, I figured now was as good a time as any. 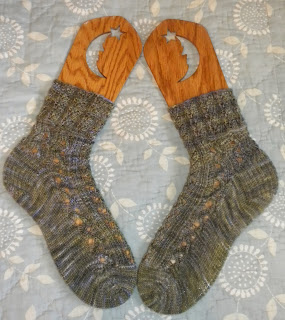 No mods.  Cuff is a little on the short side, so I have plenty of leftover yarn to do a pair of fingerless mitts if I wish.
Posted by Unknown at 4:12 PM 1 comment: