I could sew. Not so much anymore. Then again I had way more time and patience in jr high for the fiddly parts than I do now. Ironic since I love to knit and crochet. 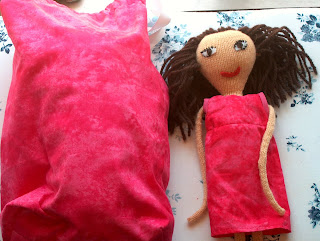 Drawstring bag:
I looked at a bunch of free online tutorials & and cobbled elements of all of them to use up 2 entire fat quarters just to see how big a bag I'd get and to check my m-i-l's sewing machine after we had it serviced. I figure it would be a good way to re-start my sewing since it involved only straight lines. I still need to take final measurements but it's large enough for Monkey1 to fit one skein of Red Heart super saver skein for her crochet project (she wants to make a throw blanket!), her lanyard project, and a pair of shorts. So far, the seams are holding, but I'm keeping my fingers crossed.

Knitted Babe Flower Power Mini pattern:
Since it was a long time since I sewed a garment, even a little doll one, I just blindly followed the pattern without checking online if there were errata or construction issues. I only realized after I cut the pieces that the size given for the skirt portion was too small to give the fuller gathered skirt look. I could either cut an additional piece to add on or re-cut another piece more to the correct size. Since Monkey1 was fine with the less-than-full skirt look, I just finished off the skirt. I had issues with the order for sewing the lining of the bodice 'cause it left me w/doing the armhole last w/bias tape. PITA so it looks really sloppy/crappy at the underarm seam. But the rest of the dress is okay. Next time I sew a dress/outfit from the book though, I'll need to do a full-on pattern review before I start cutting & sewing. 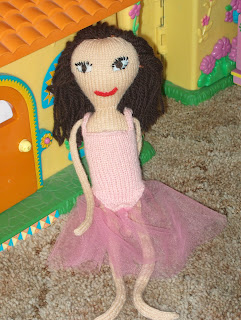 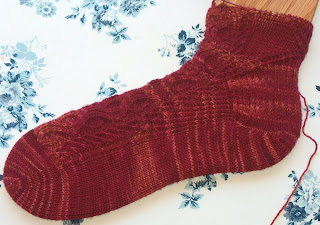 And I'm finally making significant progress on my first Digitessa sock. I messed up the beginning of the gusset because I got confused w/the charts and waffled on which side my M1P right and M1P left were supposed to go. I'm now on chart 5B for the leg and upsized my needle to a size 2 (2.75 mm) to account for the snuggest portion of the leg.

Next up: If I remember, I'll flash my custom buy stash that tapmouse got me from Sock Summit 2009 since I couldn't go.
Posted by Unknown at 11:28 AM

I really need to just pick a weekend to enjoy my sewing machine...I just can't put down the yarn!

Love your digetessa sock! So pretty!! We missed you at sock summit!

Your Knitted Babe is very elegant.

Love your knitted babe! That tutu is just right. Great pink knit top/tulle bottom combo.
And Digitessa is looking pretty too. I have yet to knit a toe-up sock that fits me right, but I'm not giving up.

The knitted babe is adorable! The dress is cute too, but seriously... Bias tape in the armholes??? For a dolls dress? Somebody should be hurt for that! I need to get my sewing machine fired up again too. I want to make some window treatments for my bedroom this fall once the boys all go back to school.

You are inspiring me to finally get out the sewing machine.