My Sock Camp toilet paper roll cover/cozy (our homework) cobbled from a bunch of different crochet patterns. At some point I'll list all the pattern pieces I ended up using on my Rav project page. 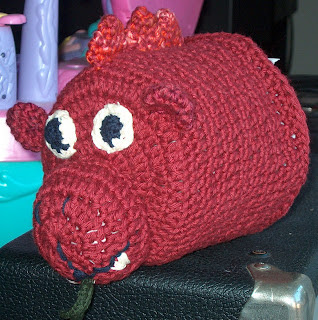 Stariel's TP TeePee (hee!) that I ended up with after the hysterical tp cover passing game. Like the chicken passing game from last year's sock camp, Cockeyed would tell a story and every time she said right or left we would pass whatever we had in our hands in the appropriate direction. Or not as the case would be when we were laughing so hard some would miss a particular direction. I don't remember what tapmouse told me about last year, but this year, we had Cat & Stephanie do an interpretive "tree" dance while Cockeyed told the story. 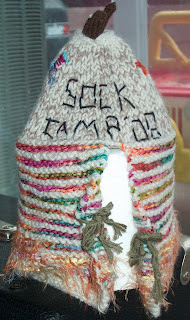 Tapmouse showing off her tp roll cover and her Ribby Pulli!: 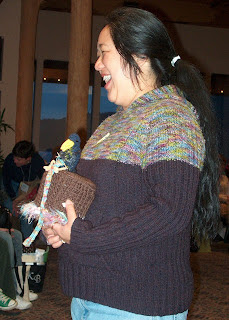 Edward is still in need of his sweater. Monkey1 is playing Project Manager and has been on me to get it done. As if I didn't have enough of project managers at work. ;) BMFA gave us 2 little yarn balls to make these small monkeys, but they had kits for the bigger monkeys for sale (both sizes included in the pattern). I bought a monkey kit to make Monkey2 a blue monkey sometime soon-ish. 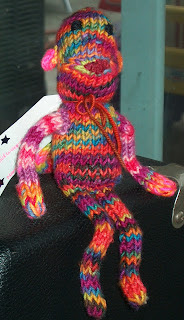 The new colorways debuted at Camp - Knitters without Borders, Kaw Kaw (the Sock Campers exclusive for awhile) and Eggplanted. Knitters without Borders was only available in lightweight at Camp but once it goes up on the website, I assume it'll be available in other weights. Same for Kaw Kaw when it eventually goes up. Eggplanted, on the other hand, was available in other weights and fibers and looked fabulous in all of them. (Of course, I bought more than this, but it ain't all going up on Rav anytime soon.) 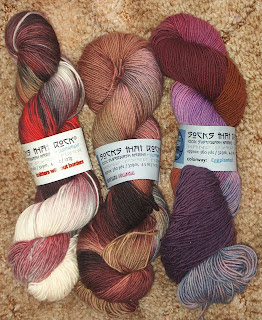 Our own yodelling Sock Camp knitter who shares my RL name: 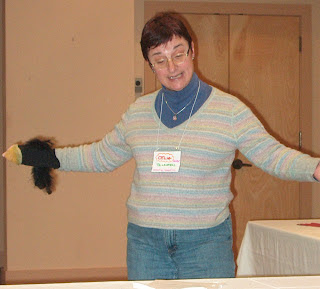 Cat getting a win over Stephanie (I think) in the turkey baster knit off contest: 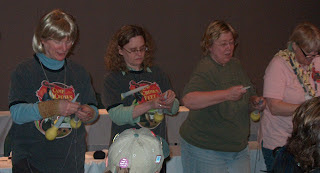 Our beloved Sockateers! Unfortunately, I was sitting too close to get a good shot of the rest of the BMFA staff without other knitterly digital cameras popping up on my screen: 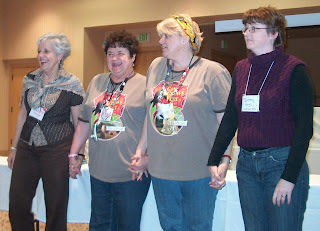 All of this wouldn't have been possible without the forebearance of my lovely family. DH & I decided that he would come up with me and watch the kids while I was at Camp. The girls had fun most of the time ('cept when the stars aligned and they were both in Grouchy & Crabby Patty mode at the same time - that being Wed when Monkey1 wanted DH to take them home). DH thought the trip wasn't too bad 'cept for the price of food at the resort ($8 Kraft mac&cheese - ugh!) and for stuff the monkeys effectively twisted his arm to buy in the biggest town on the island.

You guys had the best time!

Well, we do need to send a big shout out to DH for watching the monkeys while you had so much fun! DH rocks!!

Love all the pics!! I can't wait to knit a few more monkeys too!